It look's pretty as a picture according to our man, but does the Lexus IS250 SE-L perform as well on the inside? 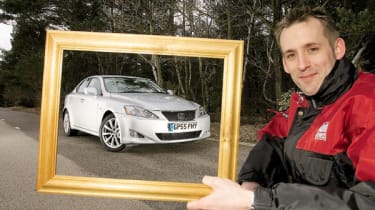 The sleek new Lexus IS is pretty enough to hang on a wall. It hits all the right style buttons, with smooth flowing lines and a muscular stance that impresses from any angle. Okay, so beauty is in the eye of the beholder, but I really do think our new top-spec IS250 SE-L cuts the mustard in terms of visual appeal. The question is, can it do the same on the road on a daily basis?

Although it only arrived in January, we've done 2,215 miles already - and they haven't been without criticism. Chief complaints centre on the obstructive six-speed manual gearbox and, from taller members of staff, the lack of headroom in the front. The latter can be remedied by not opting for the electric tilt/slide sunroof on our car.

Less easy to fix is the manual gearbox, which doesn't like to be hurried and does its best to prevent smooth progress. The obvious solution for anyone considering an IS is to shun the sunroof and put the £800 saved towards the six-speed automatic transmission (a £1,000 option).

Another problem is the lack of night-time illumination for some of the controls. Once I have spent more time in the Lexus, I'll get to know which buttons do what. But with four identical pairs of up/down arrow switches on the centre console and nothing to tell you what they all do when it gets dark, things can get frustrating!

On the plus side, the cabin is superb with high-quality materials and build throughout, while the smart backlit instruments add an extra touch of class at night. And as you would expect, there's no shortage of equipment, either. Front and rear parking sensors, eight-way electrically adjustable heated and ventilated leather seats and an electric rear sunblind are just some of the novel features that I've got to play with on my crawl to work. We also ticked the box for the Multimedia Package, which includes an excellent 14-speaker Mark Levinson stereo, satellite navigation and a six-disc in-dash autochanger.

Along with metallic paint, they all add another £4,020 to the £28,000 list price. Ignoring the sunroof would save a large chunk of that, but at a hefty £31,000, this would be still on the expensive side for a compact executive model. Beauty obviously comes at a price!

I borrowed the Lexus for a recent trip to Luton Airport. As my journey was mostly straight up the M1, I didn't have to use the notchy gear-box too much, but I was impressed with how comfortable it was cruising on the motorway. As with most Lexus models, our IS250 is very refined, which made the traffic much more bearable.Piers Ward, road tester