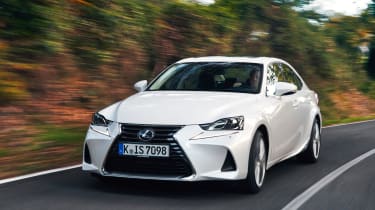 While the updated Lexus IS isn’t likely to topple the German establishment overnight, it’s not to be overlooked. The high-quality interior, stylish looks, tidy handling and tax-cutting powertrain mean it’s a great left-field choice that will suit many drivers down to the ground. If you’re after a small executive car, don’t forget the IS.

If you’re in the market for an executive saloon, there are three go-to models to consider: the BMW 3 Series, Mercedes C-Class and Audi A4. All excellent cars, but even their biggest advocates will admit that they don’t feel quite so exclusive these days - and that’s where cars like this refreshed Lexus IS come in.

The IS joins cars such as the Jaguar XE and Alfa Romeo Giulia to offer something a bit different in the executive car segment. This mid-life facelift means it has more in common with those two models than ever, with the new grille, bumper and light designs giving it a handsome new look. It’s not as pretty as the stunning Alfa, but a relatively small set of updates have lifted the IS, especially if you go for the racy F Sport trim. 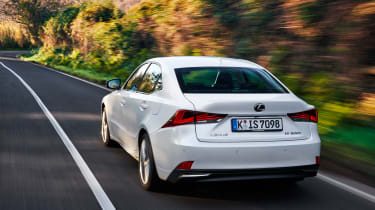 The car we tested was a Luxury-spec model, and while it does without the sportier bumpers and body kit from the F Sport, it’s still a distinctive and stylish car. It’s not quite so chic on the inside, with a smart-suited and rational cabin design, but the high-quality materials and impressive build quality are big selling points for the IS.

It’s a very comfortable place to spend time, with plush heated and ventilated leather seats, offering a great and highly manipulable driving position. Sadly it’s still fitted with Lexus’s ageing infotainment system controlled by a small mouse-like knob on the centre console, which is one of the most frustrating systems of its type. The screen looks good, but the user interface makes finding a radio station feel like you’re hooking ducks at the fair. 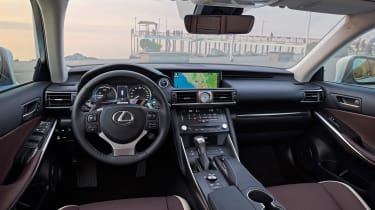 Luckily the driving experience is serene enough to counteract that irritation, as it’s very quiet inside thanks to that hybrid powertrain. At low speeds the engine isn’t even on – with electric power alone driving the car forward. But even when it turns on, the four-cylinder unit is pretty hushed, and wind and road noise are relegated to the background.

At low speeds and when travelling at a cruise, refinement is good, but bring up the pace and things get a bit noisier. The CVT gearbox works well most of the time, but put your foot down and the revs flare. There’s a fake-sounding engine note in the cabin, but it’s more buzzy than sporty - and the Lexus doesn’t feel as punchy as its diesel rivals from the German brands.

With 221Nm of torque from the 2.5-litre four-cylinder engine and 300Nm from the electric motor, the IS 300h feels punchy enough to keep up, though. An IS 200t non-hybrid turbo petrol is carried over from the pre-facelift car, but it’s only marginally faster and much thirstier. Lexus says it accounts for just 10 per cent of UK sales.

The IS has quick steering, controlled through a nicely-sized and well-weighted steering wheel, and while there’s not much feel it does help add a bit of fun to the driving experience. There’s not much body roll in corners either, and while the IS isn’t a match for the 3 Series, it’s better to drive than you might think. 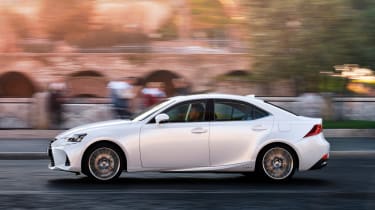 While the powertrain unfortunately means it can’t take on the best cars in its class to drive, especially as the batteries add a lot of extra weight, it does mean that the IS 300h has a company car tax advantage over the diesel rivals. Economy of 65.7mpg beats the 320d’s 64.2mpg figure, too - and emissions of 101g/km on models with 17-inch wheels keep tax bills lower too. Lower-spec models come in under the 100g/km barrier for road tax exemption.

The batteries do cut into boot space, with the 450-litre load bay not quite matching the 3 Series’ 480-litre space – but it’s not far off. The IS doesn’t feel quite as spacious in the back as the 3 Series, either, and headroom isn’t great for tall passengers. The plush front seats mean it’s not too uncomfortable for rear-seat occupants to rest their legs against them, though the transmission tunnel means there’s little room in the middle.

While the Lexus looks like good value for fleet buyers, the £34,495 list price of this 300h Luxury version puts it somewhere in between equivalent BMW and Mercedes models. There is a lot of kit included, but we’d probably go for the better-value 300h Advance, which is expected to be a big seller in the UK.