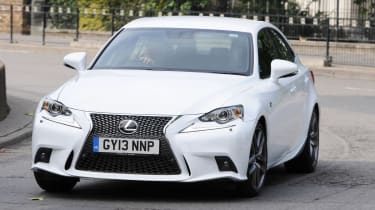 While the Lexus IS hybrid makes sense as a comfortable cruiser with reasonably low running costs, the V6 petrol model feels like it’s from a different era. It’s thirsty, and needs to be worked hard to get the best from it. The F Sport looks sharp and is well equipped, but a firmer ride means it’s not as comfortable as it should be.

The all-new Lexus IS is the most convincing compact executive saloon the brand has built yet. When we tested the IS 300h hybrid, we found it a refined cruiser with low running costs, and an attractive alternative to its German rivals.

Now we’ve tried the sporty F Sport version with 2.5-litre V6 petrol power. The petrol IS has a claimed 0-62mph time of 8.1 seconds, which is two-tenths quicker than the hybrid’s. It’s still not very fast when compared to rivals, though, and you need to work the engine hard to really get the car going. Sadly, you’re hampered by a slow-witted six-speed automatic transmission that delivers lazy shifts whether you use the steering wheel paddles or let the gearbox take control.

The F Sport has crisper looks than the standard car, but can’t back it up with a sporty drive. While the suspension has been stiffened and larger 18-inch alloys are included, all this does is firm up the ride without making the IS any sharper to drive.

The steering has been tweaked, too, but it still has little in the way of feedback. Inside, sporty touches include new seats and instruments. Yet although you get lots of kit for your cash, the cabin feels small, and navigating the infotainment system takes some getting used to.