The Lexus IS F is the firm's first pure performance car, and its big V8 and rear-drive chassis make for an entertaining combination 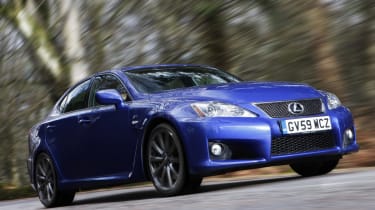 The Lexus IS F is the sporting flagship of the compact executive saloon range. It’s designed to compete against high-performance saloons such as the BMW M3, Jaguar XF-R, Audi S4 and Mercedes C63 AMG and comes with a 5.0-litre V8 that’s mated to an eight-speed gearbox. From the outside, the differences between the IS F and standard IS are subtle. The F gets a bulging bonnet to make room for the 5.0-litre V8, wider wheelarches front and rear, deeper sidekirts and bumpers, 19-inch wheels and a pair of ‘figure eight’ exhaust tips out back. On the road, the IS F is hugely entertaining. It’s not as focused as its German rivals, but that big V8 means makes it easy to spin the rear wheels and indulge in lurid powerslides when you turn the traction control off. But the IS F is equally at home when you want to take it easy, as it soaks up bumps and is quiet and comfortable with lots of standard kit to keep you occupied.

The Lexus IS F is great fun on open roads. The big V8 delivers lots of power and is accompanied by a glorious exhaust note, and while the IS F isn’t as composed as a BMW M3 in corners, that only adds to its appeal. Another highlight is the eight-speed automatic gearbox. Some might say that eight gears is overkill, but the box changes gears smoothly, whether you use the paddleshifters or let it get on with the job itself.

That 5.0-litre V8 isn’t going to win any eco awards, as it returns 24.4mpg and emissions of 270g/km, but they are similar figures to the BMW M3 and Mercedes C63 AMG. But that eight-speed gearbox does help economy on the motorway, as top gear is very long and the engine turns at low revs. In terms of price, the IS F is around £2,000 more than its rivals, but it comes with lots of standard kit.

The Lexus IS F gets off to a good start, as the standard IS is already a handsome looking car. The F model adds bigger alloy wheels, deeper side skirts and bumpers, plus a mesh grille and bulging bonnet to make room for the V8 up front. At the rear, figure-eight exhausts poke out of the rear diffuser. Inside, the IS F comes with leather and suede seats, but apart from that and a few F badges, there’s not much difference between it and the standard car. Things are made even more confusing because Lexus offers much of the IS F’s styling kit on F Sport models.

Super saloons mix high performance with a dose of practicality, but the IS F has to give second best to its rivals here. The front seats are mounted quite high, and tall drivers may struggle for headroom, as the door frame is awkwardly close. In addition, there are a lot of buttons on the dashboard, which takes some getting used to. As with the standard Lexus IS, the IS F has cramped rear seats, while the boot is only 378 litres, some 100 litres smaller than the BMW 3 Series and Audi A4.

The Lexus IS F has a raft of safety kit to keep you out of trouble. Traction and stability control are standard, and the standard IS has a five-star Euro NCAP safety rating. Lexus has an excellent reputation for reliability, and the IS F should maintain that record. Lexus dealers have an outstanding record in our Driver Power surveys, so should any problem arise, it will be dealt with quickly and professionally, with the minimum of fuss.

More on IS F Saloon 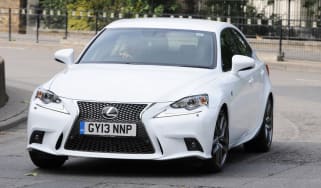