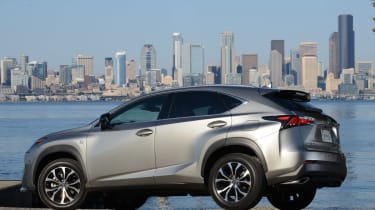 This is the new Lexus NX. "Oh dear, another posh 4x4 wannabe," I hear you cry - but hold fire, because this car has one or two talking points that mean it’s more than just another compact premium SUV.

For starters, just look at the NX. It’s edgy and controversial – and crucially more handsome than the concept car which spawned it. Question is, once the styling has drawn you in, has the NX got substance beneath its crazy skin?

If the outside of the NX is unfamiliar and scary, inside it’s all reassuringly Lexus. It’s beautifully made, quite funky and angular, and the stereo is great. The annoying mouse control on the centre console has given way to a touchpad to control the main screen. It’s not as accurate as BMW or Audi’s click-wheels, but it’s a big improvement.

The NX certainly looks the fashionista’s wagon inside and out, but the drive isn’t going to give a BMW X3 nightmares. This NX 200t, packing Lexus’s first ever turbocharged engine, is a more agile, puncher steer than the disappointing hybrid version, but it never really feels the full 235bhp, and you only get six gears in the standard automatic gearbox. Add in a stiff urban ride and you realise the NX occupies the middle ground between the doughy Volvo XC60 and more chuckable BMW X3.

It’s a curious car, this NX – great to look at outside and really fresh-feeling inside. Dare we say it, it’s the first Lexus ever that someone below pensioner age might be seen dead driving. Expect to see it coming soon to a school run near you. 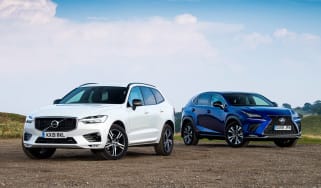 Should you go for mild-hybrid diesel tech with the Volvo XC60, or full-hybrid petrol power with the Lexus NX?