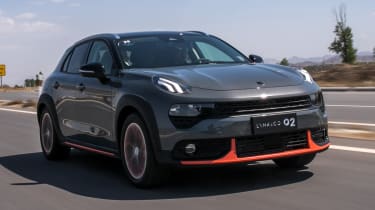 Our initial experience with the 02 was far from in-depth, but even this early drive suggests it’ll tick all the necessary boxes when it comes to practicality, safety and comfort. Lynk & Co is a brand with ambition and has a new way of thinking about modern day car ownership; its monthly subscription service will simplify the car buying process for a lot of people. It may take a few years for the company to arrive in the UK, but based on what we’ve seen it’ll be worth the wait.

There’s a chance you may not have heard of Lynk & Co. The brand only appeared at the end of 2016, but in that short space of time it has come a relatively long way. Two models are already on sale in China, with a third in the pipeline. Think of the company as Volvo’s more adventurous younger brother, and you’ll be on the right lines.

It’ll be a few years until Lynk & Co appears in the UK with right-hand drive models, but the brand is coming, and the 02 – driven here for the first time – has been designed with a European market in mind. The company’s rapid growth has been made possible by the power of its parent company, Geely, one of China’s largest car makers.

When Lynk & Co arrives it will be positioned as a more affordable alternative to Volvo; just as Skoda is to Volkswagen. But being cheaper doesn’t mean a sacrifice when it comes to design or tech; the 02 is essentially a Volvo XC40 in a new designer suit. Visually, it’s a welcome antidote to the current tidal wave of mundane and conservative SUVs - the 02’s more daring shape and design cues giving it real kerb appeal. 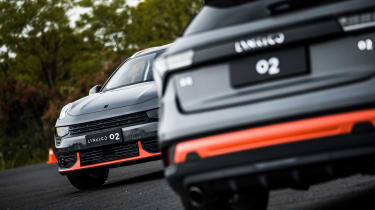 It’s a similar story inside; the cabin is trimmed with a mix of leather, aluminium and textured plastics. A 10.2-inch display sits flush in the centre console and is controlled by touch or voice commands. In testament to how intuitive the infotainment system is to use, even in our Chinese spec test car the menus and sub menus were simple enough to navigate.

The driving position is low, there’s lots of adjustment in the steering wheel and build quality is first rate. Our car rolled out of Lynk & Co’s brand new £1.4 billion state-of-the-art factory in Zhangjakou, on the outskirts of Beijing – and on this evidence, it looks like the negative connotations associated with being ‘Made in China’ will soon be a thing of the past.

In Europe, every Lynk & Co model will be electrified, which means the 1.5-litre three-cylinder engine we’re driving here won’t be offered. It will, however, form a basis of the plug-in hybrid version.

In our car, the trademark three-cylinder thrum was well muted. Refinement has been a particular focus point in the car’s development, and that becomes more apparent as you begin to make progress. The light steering, cushioned ride and smooth seven-speed dual-clutch gearbox makes it a composed and civilized crossover to drive.

It also packs a punch, developing 178bhp and 245Nm of torque. Power delivery is far smoother than the boosty and frantic nature many three-cylinder engines are known for; suiting the car’s more mature and refined character. 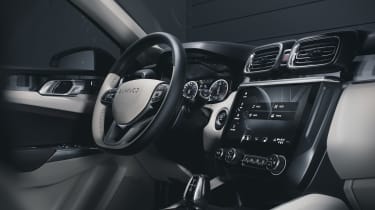 At motorway speeds there was some noticeable wind noise around the A-Pillar, while the ride felt a little more unsettled – fidgeting over surfaces that seemed perfectly smooth to the naked eye. European cars will get a slightly tweaked suspension set-up, however.

Our test route around the roads of the Zhangjakou plant didn’t give us the opportunity to fully assess the car’s handling, but it’s clear the car’s softer and more comfort-focused setup is unlikely to win favour with keener drivers.

Despite it being relatively compact, the 02 is rather practical; there’s enough space for two six footers in the back with knee and headroom to spare. There are no boot measurements just yet but it’s clear the space is pretty standard for this type of vehicle.

What’s not so standard is the way Lynk & Co will sell its vehicles. Buyers can pay for them outright – our top spec test car costing around 200,000 RMB in China (£23,000) – or pay one monthly fixed fee to cover all vehicle costs. It’s too early for any initial figures, but the complexity and hassle that monthly fee will remove from the car buying process will surely appeal to the younger customers Lynk & Co is targeting.