Third report: Supermini is a hit on trip to rain-soaked music festival 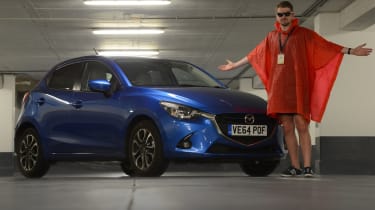 Navigation issues aside, the 2 was nothing short of perfect in my hands. It looks great, is comfortable and classy inside and drives beautifully to boot. Even winding around Brussels desperately trying to get back on the right track was somehow enjoyable - which takes some doing.

Anyone who knows me well will tell you that I have a rather old head atop my 24-year-old shoulders. Give me a Frank Sinatra album over the latest chart-topper and 40 winks over 40 drinks any day.

So when Mazda came calling and asked if I’d fancy driving our 2 supermini to Brussels to go to Tomorrowland – the biggest dance music festival in the world – you can imagine the nature of my response.

Well, er, I jumped at the chance. Not because I’d had a sudden change of heart and decided to act my age rather than my birth year, but because the prospect of driving the 2 on a 400-mile round trip was one that I simply couldn’t refuse. 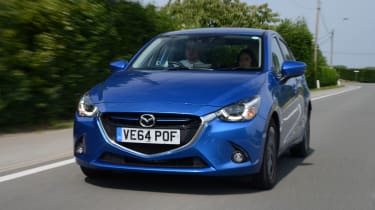 The little Mazda has been at Auto Express HQ since the middle of May and has received nothing but praise. And when I eventually got the keys and made my way from our central London office to my Essex home, I witnessed the wow factor first hand.

All roads then led to Belgium. My girlfriend Samantha got the nod to accompany me on the trip, and we were immediately impressed with the car’s punchy 1.5-litre petrol engine and the head-turning Dynamic Blue metallic paintjob – not to mention its upmarket cream leather trim and classy touchscreen.

However, she’s not the lightest traveller in the world, and when it came to loading her unnecessarily large pink suitcase, the 2’s large load lip was a bit of a nuisance. The boot itself is big enough, though, and easily swallowed my comparatively measly bag. 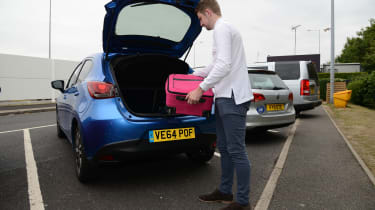 We were soon cruising along France’s autoroutes en route to the Belgian capital, yet with the speed limits as high as 81mph, I had my doubts as to whether the 2 would be able to keep pace without exhausting itself. However, the supermini held its own and was beautifully refined, too. Plus, when it came to overtaking, the Mazda had more than enough power in reserve for the job.

So it’s safe to say that I was very much enjoying myself behind the wheel of the 2. That was, until we got to the centre of Brussels. The sat-nav had been nothing but a gem throughout the journey, but totally lost its bearings on the busy city streets. 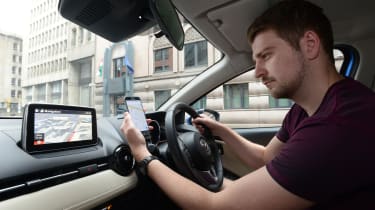 It was telling us to go down roads that didn’t exist and head along one-way streets the wrong way – not ideal for a novice driver in Europe. An hour had passed and I’d just about run out of patience and expletives, so decided to take evasive action and open up Google Maps on my smartphone.

Despite the rather annoying data roaming charges incurred, reliable old Google got us to the hotel with the simplicity I expected from our Mazda’s system. It’s a shame, as the 2’s sat-nav is slick and has a host of handy features – yet it couldn’t get the simplest feature right. 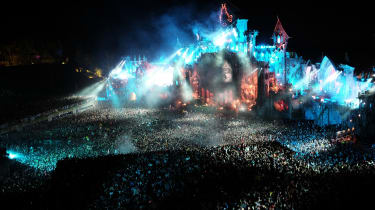 After a few drinks at the hotel, I soon forgave the Mazda for what was a minor chink in its otherwise flawless armour and even looked forward to getting back behind the wheel for the journey home.

There was just the matter of a mind-numbing music festival to endure before that could happen, yet as it transpired, the rain-soaked Tomorrowland was one of the most enjoyable experiences of my life – right up there with spending 400 miles in Mazda’s excellent supermini. 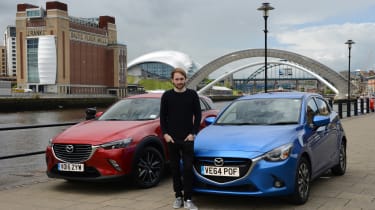 There's no doubt about it, Mazda is in a rich vein of form. Four of its seven models walked away with either a trophy or a commendation at the annual Auto Express New Car Awards in July – that’s more than Mercedes managed and just as many as Audi scooped.

Yet beyond that, and perhaps even more impressive, is that Mazda doesn’t only develop good cars, it develops good-looking ones, too.

In today’s market, appearance is everything; it’s not just about plenty of kit and value for money. Take your pick from Mazda’s model range – there isn’t an ugly duckling among them. It’s all thanks to the box-fresh Kodo design language, which translates into the sharp-suited and well proportioned models that fill its showrooms. 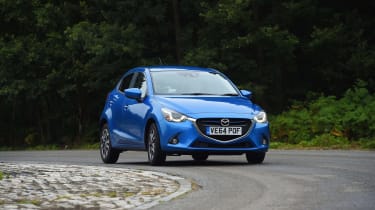 As Mazda prepared to launch its baby CX-3 crossover in Newcastle, I picked up the keys to the 2 on our fleet and hit the M1 for the 275-mile trip north to a launch venue also famed for its design and architecture – and my home town. On the banks of the River Tyne, sitting against the backdrop of the Sage, Baltic and Millennium bridge, the 2 and its new sister car really looked the part. Broad shouldered and angular, they lead the way in terms of style in their respective markets, and I haven’t yet met anyone who disagrees.

It’s not all style and no substance, though. Beneath the skin, there’s some sports car DNA in our 2, as it’s powered by a detuned version of the 1.5-litre four-cylinder petrol engine you’ll find in the MX-5. Here it produces 113bhp, and because it isn’t turbocharged like every one of its closest competitors’ units, it rewards like no other. 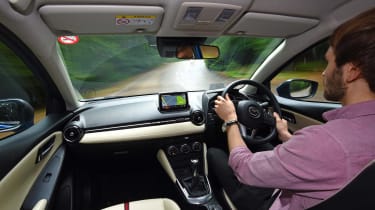 Power builds in line with the revs, and as the low-end urgency that a turbo provides isn’t there, the six-speed manual gearbox has to be worked, but snickety changes make it no hardship. The ride is a bit firm and the steering could do with more weight, but its playful, rev-hungry character is almost unrivalled in the supermini class.

What’s also impressed me about the 2 is how Mazda has managed to cram in all the kit you could ever want, yet still offers a clutter-free and minimalist cabin. I’m not a huge fan of the fake carbon-fibre trim, and some of the plastics feel a little cheap given this is the range-topping Sport Nav model, but the intuitive infotainment system is a real highlight. 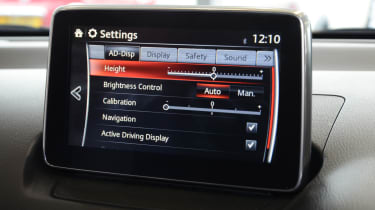 It hasn’t all been plain sailing, however. The seven-inch colour screen occasionally freezes on start-up and refuses access to the main menu. The only way around it is to kill the engine and start it up again. Still, it’s only a small niggle, which doesn’t upset what has otherwise been a faultless first three months on the fleet. 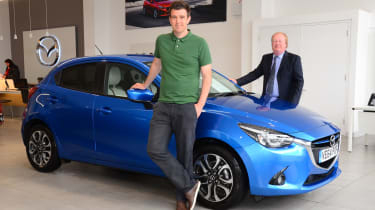 “Mazda is the brand to have at the moment.” Those aren’t my words, they’re coming from Graham Doley, General Sales Manager at Croydon Mazda, as we look across the showroom towards the sparkling ‘Dynamic Blue’ Mazda 2 supermini that’s just arrived on our long term test fleet.

Now, it would be easy to put Graham’s assertion down to the usual patented car salesman bluster but looking around the Croydon Mazda showroom at various examples of the Mazda 3, Mazda 6 and Mazda CX-5, it’s clear that Mazda’s is a range without conspicuous weak points. With the Mazda 2 having just hit dealers around the country and both the CX-3 and new MX-5 to follow, there’s definitely cause for optimism, and you can quote me on that. 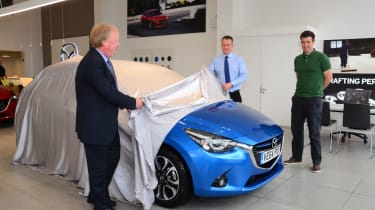 Anyway, we’re about to find out first hand just how optimistic UK Mazda dealers can realistically be. I’ve come to Croydon Mazda to take delivery of a new Mazda 2 1.5 petrol in plush Sport Nav trim on behalf of Auto Express. It’s taking its place on our long term test fleet for the toughest of motoring evaluations.

This is a £15,995 supermini with a paint upgrade, a striking Light Stone leather interior and a safety pack pushing the on-the-road price up to £17,725. Even these days, that seems a lot of cash for a supermini but this Mazda 2 feels the very definition of ‘fully loaded’ with its slick sat-nav and infotainment system, a neat head-up display, blind-spot monitoring and much, much more. 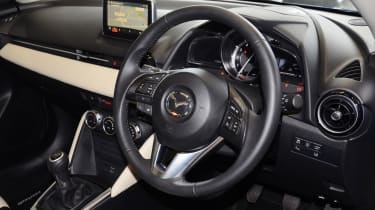 The family-owned Driftbridge Group that runs Croydon Mazda also represents the Volkswagen and Audi franchises in the area and that produces interesting comparison. Those German brands occupy the upmarket territory that Mazda has ambitions of pushing itself into with cars like the 2. 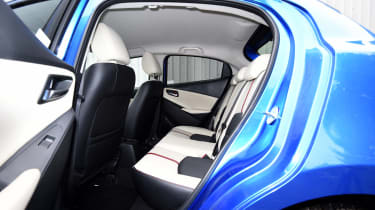 The thought of cream leather seats will give parents of young children serious palpitations but without the footprints and crisp crumbs they look great. There’s even more cream leather cutting a swathe across the passenger side of the dash to enhance the upmarket feel. The instrument cluster looks fantastic too, as does the central display screen with its clever interface blending touch and traditional controls.

For two weeks prior to this official handover, the Mazda 2 has been bedding into the fleet by serving as my family car, a big ask for any supermini. It’s done pretty well. The ISOFIX child seat mountings are very easy to locate through slits in the seat fabric and a tall front passenger can sit comfortably ahead of the bulky child seat once it’s installed. The boot has quite a lip but, surprisingly, our hefty pushchair can be coaxed inside, once you’ve perfected the technique. 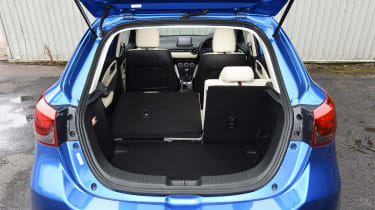 The driving position is good but the reach adjustment on the steering column is extremely stiff. Meanwhile, the shifting action on the 6-speed manual gearbox has to be one of the best out there on any supermini.

The 1.5-litre petrol engine does lack low-end grunt in certain situations, especially compared to the small turbo petrol units increasingly being used by rivals. The trade-off for this is a smooth supply of power right up to the 115bhp peak at 6,000rpm and beyond, at which point the engine takes on a sporty growl that should keep the keen driver coming back for more. 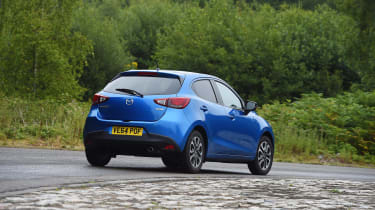 So it looks like optimism is the buzzword where Mazda is concerned. Croydon Mazda is only 18 months into its journey with the brand and the sales team were delighted to have sold 275 units in the first 12. “The cars just took off from day one,” says sales support manager Peter Lindsey as he hands me the keys to our Mazda 2 long termer, for which the early signs look just as good.