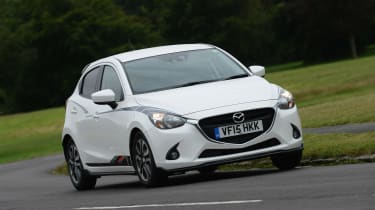 The Mazda 2 Sport Black special edition costs exactly the same as a top-spec Sport Nav model, plus you get plenty of sporty trim extensions thrown in. The sacrifice is that you have to make do with manual air-con, while the Sport Nav gets climate control, but if you like the look of the Black – and many younger drivers will – then this special edition actually represents pretty decent value for money.

The Mazda 2 won us over earlier this year with its free-revving, naturally-aspirated petrol engine, so much so that we gave it a commendation in the 2015 Auto Express New Car Awards.

Now, Mazda has launched a Sport Black special edition, which comes complete with gloss black detailing and a raft of extra kit.

Oddly, you can’t actually order your Sport Black in black, only red or white – the name simply refers to the gloss black front and rear spoilers and unique side skirts. In addition, the Sport Black features 16-inch Gunmetal alloys and a chrome exhaust pipe. 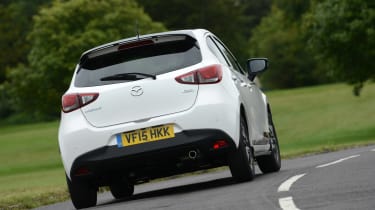 It’s also crammed with kit, and, with the exception of climate control, comes with all of the equipment from a top-spec Sport Nav model. That means a seven-inch colour display featuring sat-nav, Bluetooth and DAB, as well as parking sensors as standard.

However, the ‘KODO’ graphics that run from the front wing to the tail-lights on the special edition will set you back another £185, while the decals at the bottom of the doors cost an additional £149. The black mirrors are extra, too, adding £59.

The Sport Black is only available with the 89bhp 1.5-litre petrol engine, but don’t let that put you off. The Mazda2 is great fun to drive, feeling nippy around town yet refined on faster A-roads. 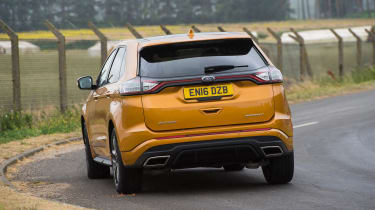 As with all versions of the Mazda2, the ride is a little firm – especially on these 16-inch wheels – but the reward is a sporty feel that isn’t a million miles from the acclaimed MX-5 roadster.

It’s got a sweet, short-throw five-speed manual gearbox, too, along with direct steering. Only the Ford Fiesta is better on a back road, but few other rivals can match the Mazda’s playful nature.