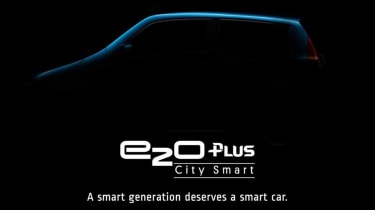 Indian carmaker Mahindra made its debut in the UK with the e2o electric city car, and now a four-door model called the e2o Plus is on the way, as seen in a set of teaser images released online by the car maker. The three door is on sale now, priced from £12,995.

The teaser images don't show too much, but do give us an early idea of what the extra set of doors has done to the car's design. It's likely to cost from around £15,000, with the extra doors allowing families and other buyers much easier access to the back seats. 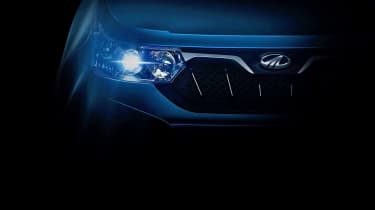 Nothing is known yet about the details of the e2o Plus, but the current two-door model uses a 31kW electric motor which produces 42bhp and 91Nm of torque. That's enough to get it up to a top speed of 63mph (10mph more than a Twizy), with a 0-25mph time of 4.9 seconds and a 0-50mph time of 18 seconds.

The e2o is currently on sale in India for less than half the price it is in the UK, at £6,000, but Mahindra has upgraded it comprehensively for more demanding British buyers. It gets more performance and range, additional equipment and an upgrade in terms of passenger safety. The starting price, which includes all battery purchase, is less the a Renault Twizy (£18,445).

The 14kWh lithium-ion battery pack gives it 79 miles of range in base spec, and 88 miles with the 'Revive' mode offering remote emergency charging. It takes nine hours to charge via a normal plug socket, while the TechX model can be charged in 90 minutes on a fast charge to 90 per cent. 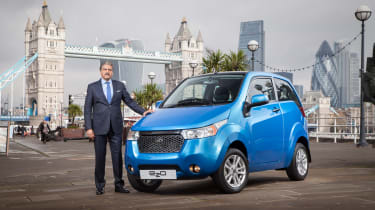 The e2o comes with two trim levels; the base e2o City and the e2o TechX. The former comes with fabric seats, electric windows, power steering, heating and an LCD digital instrument display, while the Tech X (at £15,995 after the government grant) receives with air-con, a Blaupunkt touchscreen sat-nav system and even a smartphone app that can pre-heat and cool the car remotely.

Unlike the sparse G-Wiz, the e2o gets two airbags, ABS and ESP as standard, as well as ISOFIX mounts for the rear seats. This new regard for safety is because, at 940kg, it's too heavy to be classified as a 'heavy quadricycle' like the G-Wiz and therefore has to offer basic safety equipment.We'll have to wait to find out how well it does in the Euro NCAP safety ratings, however. 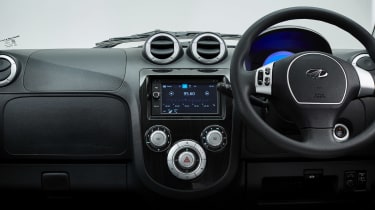 That classification of the e2o as an M1 Class car, plus its 62mph top speed, means it can be taken onto motorways, too. But that's obviously not its targeted purpose, and Mahindra estimates that the average commute in the UK is 22 miles.

Mahindra is doing without dealers by selling the e2o through its website, and delivering them to customers directly. Mahindra's electric vehicle boss Arvind Matthew told us that 90 per cent of servicing and maintenance can be done at the owner's home by a mobile team.

Mahindra are offering test drives in London, Birmingham, Bristol and Milton Keynes, with potential to expand to other cities and towns at a later date.

What do you think of the Mahindra e2o? Let us know in the comments...