We drive congestion charge-beating Mahindra e2o electric car - is it any better than the infamous G-Wiz? 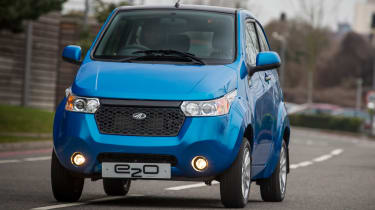 In isolation the Mahindra e2o has its plus points. It suits London’s crowded streets, and buyers on a budget looking to save money on fuel and congestion charging could be swayed. It’s also a much safer and more comfortable prospect than the G-Wiz. However, it doesn’t really represent great value for money. A Renault Zoe costs £18,445 including battery hire, is better to drive, more spacious and more comfortable and is offered with very attractive PCP deals – so you don’t have to worry about poor residual values.

Those familiar with London’s congested streets will also be aware of the G-Wiz – a tiny electric quadricycle that launched well before today's EV blitz. It earned a reputation, but not a good one. It was slow, crude and cramped, and because it was never classified as a car it didn’t have to pass the usual safety tests.

Now Mahindra (the Indian tech giant that bought the rights to the G-Wiz) has launched a successor in the UK. It’s called the e2o and is significantly larger, heavier and faster than the G-Wiz, so – thankfully – it is required to meet the same safety standards as any car on sale.  The recyclable plastic body panels are bonded to a steel frame in a purpose-built green factory in Bangalore, India.

It comes with most of the safety kit we’ve now become accustomed to; the entry-level City model, starting from £12,995, gets two airbags, ABS, ESP and ISOFIX points for the rear seats. Our £15,995 Tech X model (the one most people are expected to buy) brings along heated leather seats, air-con, and a touchscreen navigation system with a reversing camera and a suite of smartphone apps to show range, check charging and even pre-heat the car when plugged in. 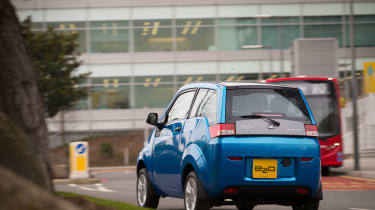 Of course, given the price, you have to make some concessions in terms of quality. The doors feel substantial enough, but the dash design looks cheap and the plastics used aren’t anywhere near the standard found in any modern petrol-powered city cars. Still, it’s far better than the G-Wiz it replaces, and the e2o has space for four medium sized adults at a push. With the rear seats up, the boot is only big enough for a couple of small shopping bags, though, and despite a small compartment in the front it doesn’t compare to any modern city car for practicality.

Compared to the G-Wiz, the e2o is a real improvement on the road. For a start, the 42bhp electric motor actually provides adequate performance up to 30mph, although its best left in boost mode as it can feel a bit sluggish otherwise. Although the e2o can legally venture onto motorways, we wouldn’t want to as any incline or high speeds see it struggle to gain momentum. Plus, the claimed 80-mile range of the lithium-ion battery pack would drop the faster you go. At least the fast charger allows you to fully replenish the batteries in just 90 minutes, while a revive mode allows an extra eight miles of emergency driving. 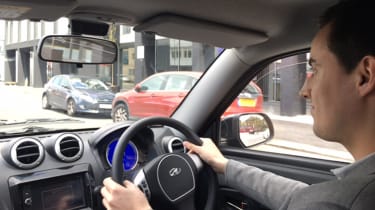 The electric motor is quite noisy, too, whining away just as noticeably as it does in a Renault Twizy. The brakes are adequate, but required a firm stab at the pedal, while the light steering doesn’t inspire much confidence to corner quickly. The wider and longer wheelbase at least means that the ride is quite stable, and around town it’s definitely more comfortable than a Twizy. Put simply, its much better than the current crop of microcars, but almost any other EV on the market rides, handles and performs more capably.