The Vision Mercedes-Maybach 6 has been shown off once more at the 2016 Paris Motor Show, giving us another opportunity to see the bonkers concept car in the flesh. At almost six metres long, the Vision Mercedes-Maybach 6 is a (very) long-wheelbase coupe that's destined, when it hits production in 2017, to rival the Rolls-Royce Wraith and other super-luxurious sporting models.

Official details show that the concept is powered by an electric powertrain with 740bhp, but with a range of over 200 miles. Performance figures are impressive too: 0-62mph takes less than four seconds and the top speed is limited to 155mph. Fast charging means you can add an extra 100km of range in just 5 minutes. Autonomous driving tech is fitted as well.

The huge 24-inch wheels, long bonnet and rounded tail all give it a very futuristic appearance, but it's the interior that really looks like it's 20 years ahead of its time. The strange seats, minimalist dials and swooping dash design all give it a unique look. It's certainly a far cry from the kitted-out Mercedes-Maybach S600 limo. 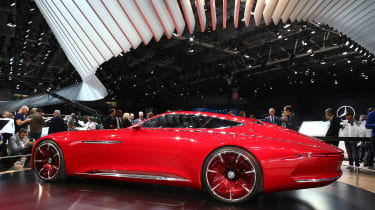 Mercedes calls the interior design "inside out" and says it features a 'cool' colour scheme to contrast the 'hot' one on the outside. Along with the futuristic interior is a set of suitcases specially made for the car. The display in front of the driver has all the infotainment and navigation information you need, and the front windscreen also serves as a display for driving-related data.

There's a set of slim headlights and a gigantic chrome grille that dominates the front-end, along with that long bonnet and slim door mirrors. Gullwing doors give it a sporty edge, and the rounded 'boat tail' is intended to look like a luxury yacht. A split rear window and a rear diffuser complete the dramatic look at the back.

A length of nearly six metres suggests that it's a modern interpretation of 2004's Excelero, which was a V12 sports car in turn based on the idea of a modern 1930s luxury car. The concept is believed to be a longer, wider and more luxurious model to sit above the S-Class Coupe in the Mercedes family line-up and we expect to see a production version of the new car at some point next year, priced from around £240,000.

What do you think of the Mercedes-Maybach concept car? Let us know below... 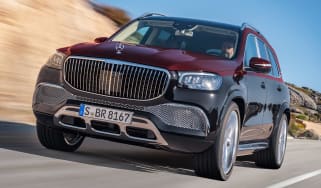