Mazda’s groundbreaking rotary engine is 50 this year, and to mark the anniversary we drive a trio of Wankel-powered classic cars 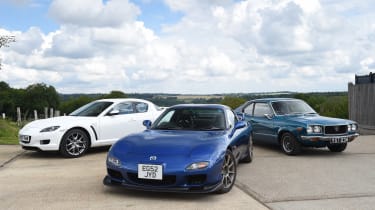 Mazda launched the Cosmo Sport, its first rotary-engined car, in 1967, so the brand is celebrating the unique motor’s 50th birthday in 2017. While there are no cars in production today that use this power unit, it’s such an important part of the Japanese company’s identity – and motoring history – that we’ve joined the celebrations.

Also known as the Wankel, after its inventor Felix Wankel, the rotary engine was first conceived by the German engineer in the twenties. It wasn’t until after the Second World War that the concept took off, though, when German vehicle manufacturer NSU began to collaborate with Wankel on his new type of powerplant in the fifties.

Where a normal combustion engine has cylindrical pistons that move up and down, the Wankel engine uses a rounded triangle that rotates inside the combustion chamber. It still has the same basic principle: intake, compress, ignite and then exhaust, but the rotary differs in that each phase is done in a different part of the chamber as the rotors move around. 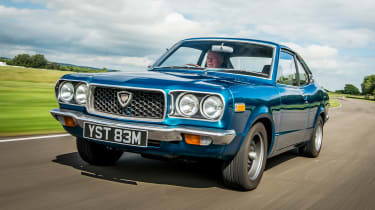 The benefits were clear in the fifties and sixties; rotary engines are much smaller and lighter than standard piston motors, as well as producing less vibration and being a simpler mechanism overall.

Plus, they were more reliable at high revs – something demonstrated by Mazda when it won the 1991 Le Mans 24 Hours with its rotary-engined 787B. This is still the only Japanese race car to triumph in the French endurance race, and also the only rotary-engined car to have achieved the feat. But it wasn’t Mazda that made the first rotary production model; it was NSU with its single-rotor Spider sports car in 1964.

Mazda was hard at work behind the scenes, though, and the company began to develop its own two-rotor engine, which ended up in the Cosmo Sport in 1967. The firm went on to produce more rotary cars than any other manufacturer, and the engine has become a core part of its brand over the past five decades.

While the Cosmo Sport was never sold in the UK, we’re celebrating its 50th birthday by driving some of the best Wankel-engined Mazdas that did arrive in Britain. First up was the tiny RX-3, which was one of the first rotary cars to be sold in the UK after the R100 in the sixties. 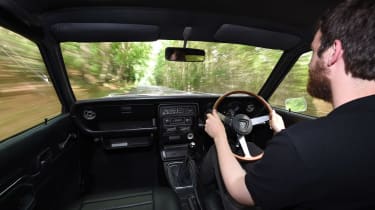 The RX-3 came out in 1971 and had a 104bhp two-rotor engine linked to a four-speed gearbox. The car we drove had a later 109bhp engine with a five-speed transmission. As it weighs only 875kg, the little RX-3 has astounding performance for its age – and the soundtrack to match.

After a few tries, customary for any seventies motor, it fired up with a roar, settling into a characterful off-kilter idle that’s unique to the special engine under the bonnet. On the road the engine takes over everything about the driving experience. It’s incredibly responsive and revs with vigour up to a 7,000rpm red line, more smoothly than any four-cylinder engine its rivals would have had in its day.

The RX-3’s exhaust note is raspy and full of life, so anyone who drives the coupé is bound to spend all day with a grin spread across their face. Blip the throttle on a downshift and a flame shoots down the exhaust pipe – you can feel the heat travel past you when your hand is on the gearstick. With no power steering, there’s lots of feel through the wheel, but it’s hard to drive quickly because the rack is slow, the brakes are well behind modern standards and the bouncy suspension can’t quite keep up.

Still, none of that matters when you’re driving the RX-3 because the pint-sized muscle car looks, incredible engine and classic vehicle charm will win anyone over. It even proves that Mazda was making motors with great manual transmissions even back in the seventies. 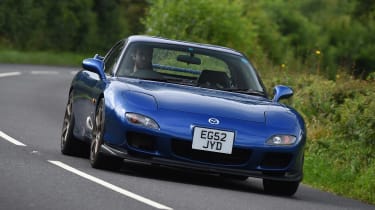 The next rotary Mazda we drove was the nineties RX-7. While the first-generation car was launched in 1978, this third version came out in 1991 and stayed in production until 2002. Our example was imported from Japan and has a two-rotor twin-turbocharged rotary with 276bhp.

We think the RX-7 is ageing with dignity, and looks just as stunning today as it did in the nineties. The curvy body and glass give it a sense of elegance, while the spoiler and bodykit help to add the feeling of aggression that a car with this kind of performance needs.

With 276bhp, the RX-7 is no slouch; it weighs around 1,200kg so 0-60mph takes less than five seconds. While it’s not quite as deafening as the RX-3, the RX-7’s rotary soundtrack is addictive – especially with the whistle from the two turbochargers when you lift off the throttle. 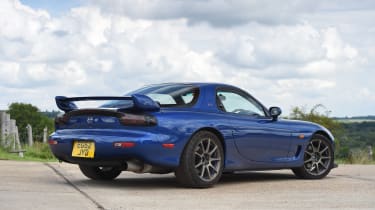 Those turbos solve one of the Wankel engine’s main problems: a lack of torque. The forced induction means the RX-7 has 357Nm, which helps with in-gear performance, but the rotary keeps its revvy nature at the same time. The low driving position, precise gearshift and quick steering mean it feels like a proper sports car inside. It’s easy to drive, though, and feels great on the road.

After the RX-7 we hopped into the rotary Mazda that we remember most clearly, the RX-8. It was on sale from 2003 to 2010, and the model we tried came out in 2007 and is a special edition built to celebrate Mazda’s 40th anniversary of rotary engines. Ten years on, the RX-8 still feels modern. The two-rotor engine was updated to improve emissions and fuel economy, losing the turbos in the process, and so it’s a little less powerful than the RX-7, with 228bhp.

With 211Nm of torque, it’s also a lot less flexible than the RX-7’s engine, so you need to work it hard to get the best out of it. That’s not too much to ask, though, because the RX-8 revs to around 9,000rpm and the manual gearbox is slick and precise – it’s fantastic fun. The RX-8 is by far the most refined car here, but it still has the characteristic rotary soundtrack and it’s great fun to drive. The ride is well judged, so you can enjoy using the accurate, fast steering and engaging chassis even on rough road surfaces. 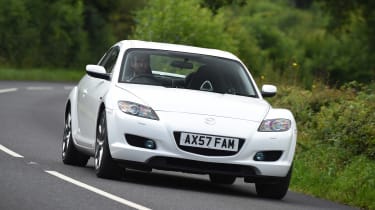 Although the RX-8 feels more modern than the RX-7, and in another world to the RX-3, you sense a family link through all of these Mazdas. While the rotary engine has kept its delightful character intact after 50 years, each model is talented and fun to drive at the same time.

Mazda doesn’t have a rotary car in its current range, because Wankels are thirsty and the firm has found it hard to bring them within emissions regulations in recent years. Rotaries also use more oil and the tips of the rotors are less reliable at lower revs. But the engine isn’t dead yet; because it’s suited to running at a constant speed, the Wankel makes a strong candidate for use as a range-extender.

Mazda has hinted that a car using this tech is on the way, along with a new hybrid sports car that will use a rotary in a performance context again, previewed by the RX Vision concept car in 2015. We can’t wait to try them.

We loved trying out the Mazda RX-3, RX-7 and RX-8, but there are lots of other cars that use the rotary engine in the brand’s history. So we went to Augsburg in Germany to see one of the world’s best collections of Wankel-engined vehicles.

Marcus Frey, one of the founders of the newly opened Mazda Classic Automobile Museum Frey, and owner of every car inside, showed us around his converted tram station.

It all began when his father Walter Frey, owner of a Mazda dealership in Augsburg, bought a rotary-engined car, and the family has been hooked ever since. “You have to be crazy to do this, you know?” Frey said. Here we round up some of the highlights of this unique motoring museum. 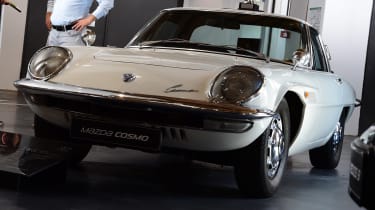 This was the first car in the world to use a two-rotor engine, but it’s the Cosmo’s stunning looks that we fell for. There are two versions with differing wheelbases, and all of them were only sold in Japan. 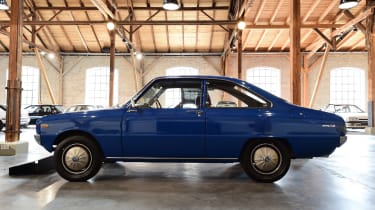 The R100 Familia used the same engine as the Cosmo and was the first rotary car ever sold in Britain. It was offered as a two-door coupe or a family saloon, and preceded the RX-3. 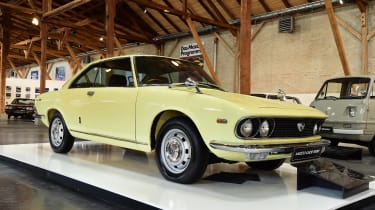 The Luce uses a unique front-wheel-drive layout and is still the only rotary car to do so. Sleek Italian-inspired styling means the coupé was one of the museum’s centrepieces when we visited. 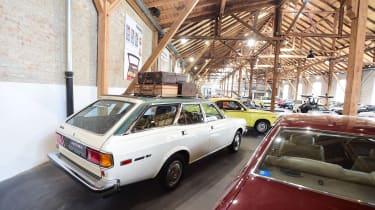 Mazda designed the RX-4 to take on the crucial US market. In the Frey museum there’s an estate version, but most were saloons. All models featured a 128bhp two-rotor engine. 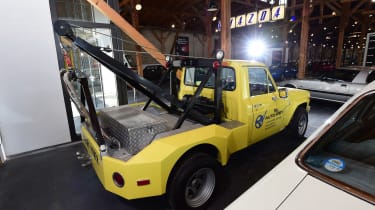 Mazda’s oddball rotary pick-up had a reasonable production run of 16,272 models, most of which were sold in America. This one is a tow truck, but normal pick-ups made up most of the sales. 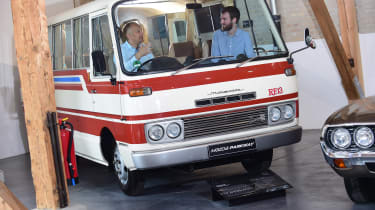 Only 44 rotary buses were made, and the one here is reportedly the only one left. They went into service in Japan and rev to around 7,000rpm, with the engine placed beneath the driver’s seat. 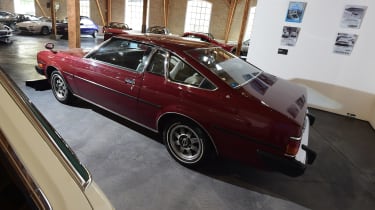 Also known as the Cosmo AP, this was much more of a luxury saloon than a performance car. Marcus Frey bought the car unseen in the UK and drove itall the way home to Germany. 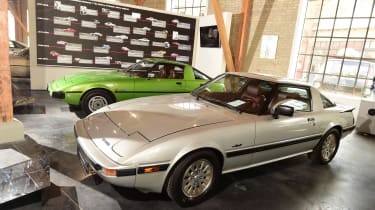 In 1978 the first RX-7 was launched as a dedicated sports car, and used a 128bhp Wankel engine under its long bonnet. The silver car in this collection belonged to Felix Wankel himself.

Which is your favourite Mazda car from the past? Let us know in the comments section below...