We've already been impressed by the new Mazda 6. Is it as good with an automatic gearbox? 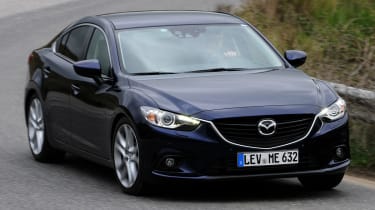 With sharp looks, efficiency and great driving dynamics, the new 6 shows there’s life in the traditional family saloon yet. The auto isn’t quite as good to drive as the manual, but with its smooth shifts, it’s not much of a compromise – and keen drivers can use manual mode.

The new Mazda 6 sets the design benchmark for large family cars, with its slick chrome-trimmed grille and sculpted flanks. It’s among the class’s best drivers’ cars, too. But is it as good with an automatic box?

In a word: yes. The six-speed auto adds just 15kg to the 6’s kerbweight and is compatible with petrol and diesel versions of Mazda’s new SkyActiv engines.

Our car had the more powerful 173bhp diesel, which promises 0-62mph in 8.4 seconds – half a second down on the manual 6.

Yet aside from the shortfall in performance, this car is a fine all-rounder. The stop-start works more smoothly than the version in Volkswagen’s DSG box, and in town the auto shuffles gears with ease.

Manual boxes tend to be the better choice for keen drivers, but this Mazda auto is engaging. It responds instantly to a flick of the steering paddles or a prod of the gearstick, and in manual mode lets you shift up just as the wave of torque starts to subside.

The performance is boosted by accurate, well weighted steering, powerful, consistent brakes and great agility. It helps that the car is 100kg lighter than the old 6.