Mazda has updated its Mazda 6 family car. Can it challenge the new Ford Mondeo and Volkswagen Passat? 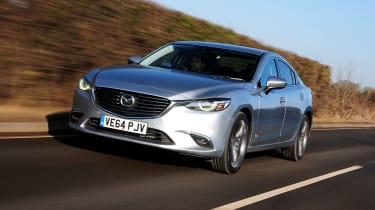 Despite what appear to be rather minimal updates to the Mazda 6, the newcomer is markedly more forgiving, comfortable and stylish as a result. None of the shine from its polished road manners has been lost yet a whole lot more has been added in other areas. The cabin is a huge improvement and running costs remain as low as ever, but the VW Passat has never been so good. The Mazda 6 just lacks that premium feel needed to truly eclipse the Volkswagen but you certainly won’t feel short changed if you buy one.

The market for spacious, good value and practical family saloons isn’t what it used to be. With the recent expanding popularity of crossovers and mini-SUVs, sales of the humble and traditional family car have suffered. Yet that hasn’t stopped Mazda from introducing a lightly updated Mazda 6 saloon.

And the Japanese manufacturer isn’t alone, with an all-new Ford Mondeo and VW Passat arriving recently to compete with this facelifted 6. While both of the Mazda’s rivals have seen a barrage of mechanical and styling updates, Mazda has only sprinkled the 6 with some light cosmetic changes. The focus instead has been on delivering a more comfortable and refined family package. 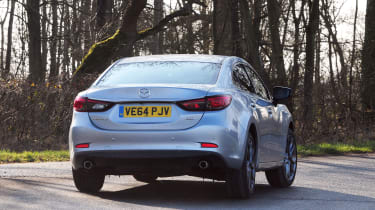 Visual updates are so light that to really notice them you have to opt for the top spec Sport Nav model like our test car. A subtly restyled nose, grille and signature chrome wing design build on the already sleek look, with new LED headlamps and daytime running lights also added. Even before these additions, the Mazda 6 was already one of the more handsome saloons in its class and little has changed.

Where Mazda has made most changes to the Mazda 6 is beneath the surface. Confident it already has one of the sharpest and most engaging saloons on the market, Mazda has created a softer and more forgiving setup was the aim with the development of the revised model. 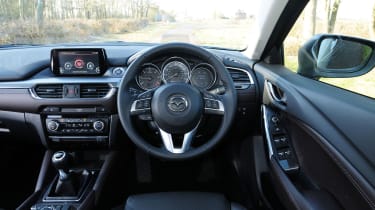 Diesel saloons dominate this particular market, so the 173bhp 2.2-litre SkyActiv diesel with Mazda’s six-speed manual gearbox was the one we sampled first. Its spec sheet makes good reading for company cars users too, with a 19 per cent BIK rating thanks to 62.8mpg and 119g/km of CO2.

But if you prioritise running costs over performance, a 148bhp version of the same engine is available for £400 less too. It offers 68.9mpg and 107g/km – better than you’ll find in the equivalent Passat or Mondeo.

It’s an effortlessly smooth and fluent engine, which once up to temperature, merely hums at idle with no unwanted vibrations making their way into the cabin. On the move, added sound deadening helps contain the gruffer engine note at the top of the rev range. While the softer dampers do give a little more movement to the body, they help suppress large imperfections and better deal with quicker changes in the road surfaces. 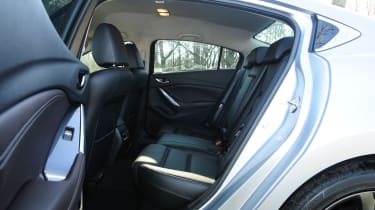 The setup is notably softer, highlighted by the lighter steering but while the changes have added a new dimension to the Mazda 6, they haven’t upset its sharp responses or nimble demeanour. Turn in is still accurate and precise with plenty of grip offered from the front end, unlike the rather numb responses you’ll get from the new Mondeo.

The crisp and short throw six-speed manual emphasizes its active character but it’s just as capable munching the miles on a long motorway cruise. What makes it so easy to drive like this is a huge 420Nm dose of torque, allowing you to pick up pace in fifth and sixth gear from incredibly low revs. That figure is also double what you’ll find in Mazda’s 148bhp 2.0-litre SkyActiv petrol engine. 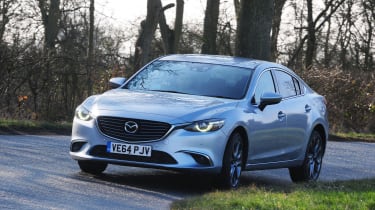 Some much-needed updates in the cabin also make the revised Mazda 6 a far more enjoyable place to spend time. There’s now more kit as standard across the range, with the seven-inch infotainment system featuring DAB radio and the swivel wheel controller from the Mazda 3 adopted. An electronic handbrake, new dials and a head-up display give a more modern edge but despite the plusher materials, it doesn’t outshine the super-plush Passat.

The Mazda 6 can’t quite match up to the practicality offered by the VW either. The boot is wide and deep but 483 litres is almost 100 down on what you get in the German saloon. Yet a simple tug on a lever releases the rear seatback and creates a perfectly flat 1,632-litre load bay.