A test mule, which will form the basis for the new Alfa Romeo Spider and Mazda MX-5, has been spotted testing in North America 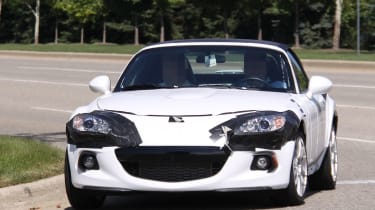 These are the first pictures of what will be new Mazda MX-5 and Alfa Romeo Spider, after a test mule, which will underpin both models was spotted testing in Michigan.

Alfa Romeo and Mazda signed a deal earlier this year where Mazda would build the new Alfa Romeo roadster on the next MX-5 platform.

This test mule is likely to be using the 1750TB engine from the Alfa 4C, which could find its way under the bonnet of the new Spider. The 1.75-litre four-cylinder engine develops 237bhp and as Alfa engineers are aiming for a sub 1000kg kerbweight, the Spider could have similar performance figures to the 4C.

Power is transmitted through a dual-clutch ‘TCT’ paddleshift gearbox, meaning 0-62mph in 4.5 seconds.

Alfa will also offer the Spider with alternative engine options for those who don’t want all that performance. The 1.4-litre TB MultiAir engine from the Giulietta in two forms of tune – 119bhp and 168bhp – is also suspected to be available. These variants are likely to be fitted with a six-speed manual gearbox.

Mazda, meanwhile, is considering fitting the MX-5 with a diesel engine for the first time, but a new 130bhp 1.6-litre petrol engine featuring SkyActive technology, is expected to be the pick of the bunch.

A six-speed manual will be fitted as standard, with the possibility of automatic paddle shift option. Like Alfa Romeo, Mazda is hopeful of achieving a sub 1000kg kerbweight, meaning a substantial weight reduction of around 150kg will be necessary. This should bring it just shy of the original 940kg kerbweight of the MX-5 when it was introduced in 1989.

A hot version of the MX-5, which would rival the Alfa Spider with the 1750TB engine isn’t likely. Mazda’s primary focus at the moment is all about weight saving and reducing CO2 emissions via the SkyActive technology.

Prices for both the MX-5 and Alfa Spider are expected to start from around £20,000, with the Mazda likely to be a little cheaper keeping with the brand's ethos of value for money. Both cars are still in the early stages of development and production won't start until 2015 at Mazda’s Hiroshima plant in Japan. 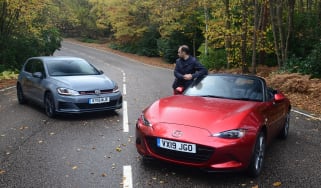