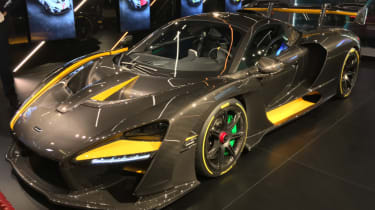 Called the McLaren Senna Carbon Theme by McLaren Special Operations, it’s one of five unique visual themes cooked up by MSO for the new Senna, and showcases the car in almost naked carbon-fibre.

This Senna wears very little in the way of paint – the only smatterings of colour on the unpainted carbon-fibre bodywork are found on the sills, rear wing and active aero blades at the front, all finished in bright yellow. 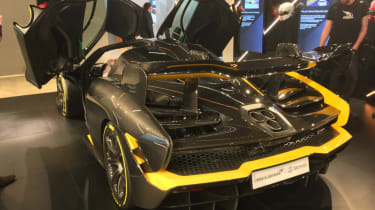 In addition to the 1,000 hours it takes to produce the Senna’s carbon body, MSO says these small patches of colour take 250 hours to complete. They join up with vibrant ‘Laurel Green’ brake calipers, which McLaren says is a nod to the helmet colours of the legendary three time Formula 1 world champion the car is named in honour of.

Inside, more Laurel Green detailing is found on the door strut. Contrasting stitching and a steering wheel centre-line use the same Solar Yellow hue applied to the car’s exterior, injecting colour into the black Alcantara and carbon-fibre clad cabin. Both seats feature the Senna ‘S’ logo on the headrest.

McLaren is pitching the Senna as a car for the circuit first and foremost, rather than a road-based supercar. Its 789bhp twin-turbo 4.0-litre V8 unlocks a claimed 0-62mph time of 2.8 seconds and a top speed of 211mph, thanks to a sub 1.2-tonne kerbweight. All 500 examples earmarked for production have already been sold, each with a price tag of at least £750,000.

Welcome to our Geneva Motor Show hub page, scroll down for all our Geneva content...
McLaren cuts a quarter of its workforce