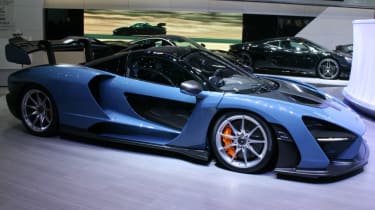 After revealing its second Ultimate Series model late last year, McLaren has now given the sold-out Senna its public debut at the 2018 Geneva Motor Show and released performance stats for the hypercar. The track-focused, 789bhp model is capable of 0-62mph in 2.8 seconds and hits a top speed of 211mph.

But the interesting stats don’t stop with acceleration. Thanks to the Senna’s motorsport-grade braking system, it can come to a complete stop from 124mph in just 100 metres. 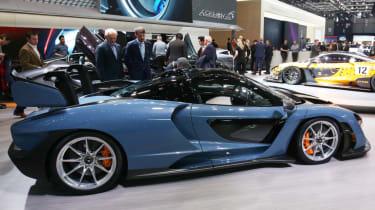 Named after three-time Formula 1 World Champion Ayrton Senna, McLaren says a portion of the car’s profits will go to the foundation set up in his name. All 500 examples have already been sold at a price of £750,000, including taxes.

The Senna isn’t a direct replacement for the McLaren P1, but will sit alongside the forthcoming three-seat BP23 in the Ultimate Series range. It’s said to give “the most intense circuit experience of any McLaren”, with every feature pared back as much as possible.

Vehicle Line Director Andy Palmer says that the brief given to engineers was to “make it as fast as we possibly can going around a track, but also make it road legal”. Palmer also describes it as the “lightest, fastest, most engaging McLaren yet”. 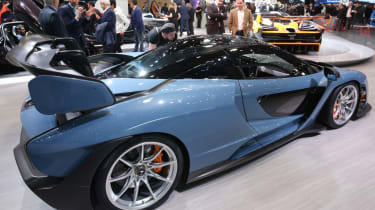 The body is made entirely of carbon-fibre and has been designed for an optimal blend of aerodynamic efficiency and downforce. Crafted in a ‘teardrop’ shape, it features huge gulleys and louvres in the side to channel air down and over the car, plus a number of cooling vents to feed the car’s multiple radiators. The Senna also gets two-piece glass windows, and a glass insert for the lower half of the dihedral doors can be specified to increase on-track visibility. The body panels themselves weigh just 60kg in total.

At the back, three exhausts sit up high and flush with the bodywork, while an enormous carbon rear wing is mounted on ‘pylons’, which rise above it and attach to the top, increasing the surface area on the bottom of the wing. Much of the car’s mechanical elements are visible from the back thanks to a giant double diffuser, which can increase in height to boost downforce.

But that’s only the start of the active aero tech found on the Senna. That rear wing is hydraulic, and like many McLarens, it tilts and adjusts to balance downforce and aero, while also acting as an airbrake under heavy braking. It weights just 4.87kg, but can support 100 times that weight in downforce. Front aero tech also features, with moveable flaps hidden in the air intakes directing cool air where it is required. The result is a full 800kg of downforce at 155mph.

Inside, the Senna is as minimalist as a modern McLaren gets. Items such as the door handles, window switches and engine start button have been placed on the roof, while the pared-back dashboard design features only the essentials. There are two double-layer carbon bucket seats with foam padding, which slide back and forth with the gear selector panel for better ergonomics. 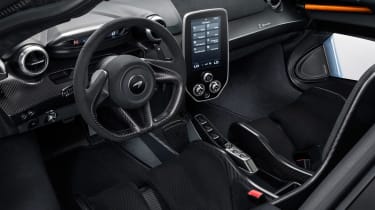 Despite the clutter-free approach, McLaren’s infotainment system is mounted on a freestanding panel, and the sliding digital instrument cluster is lifted straight from the 720S. The only luggage area to speak of is a space behind the driver’s head specifically designed for two helmets.

Weighing just 1,198kg (about the same as a Ford Focus), the Senna has a power-to-weight ratio of 659bhp per tonne. That’s better than a P1, and partly due to a new type of super-light carbon tech that the Woking-based carmaker has developed. It means the dihedral doorframe weighs just 8.8kg, and the carbon tub is 15kg lighter than the P1 at 75kg.

Palmer told Auto Express that hybridisation – like the P1’s powertrain – was considered, but discounted, as it didn’t sufficiently benefit lap times. The Senna has also been designed to deliver an even more sensory experience than previous McLarens, with sounds from the air intakes and engine mechanically amplified for those inside.

The Senna’s chassis is based on McLaren’s RaceActive Chassis Control II system, which uses a double wishbone setup with hydraulic adaptive dampers and anti-roll bars. The variable stiffness and ride height tech is said to be further developed over the 720S and P1. It adds a Race mode to the usual Comfort, Sport and Track settings, making the Senna even stiffer, while also dropping the body even lower to the ground.

McLaren claims the Senna’s braking system is the most advanced it has ever made for the road. New carbon ceramic brakes with a special ‘CCMR’ compound feature, and each takes seven months to produce. They have a far greater thermal efficiency than traditional carbon ceramics, however. Bespoke Pirelli P-Zero Trofeo tyres are standard, with a tread that is road legal but primarily designed for track use.

What do you think of the new McLaren Senna? Let us know below...

McLaren 765LT is the latest Super Series flagship has an output of 755bhp and a starting price of £280,000 – but every example has already been sold
New hybrid McLaren Sport Series supercar spied 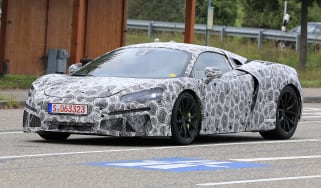