Lighter and more powerful, the McLaren Senna GTR is the latest addition to the brand's Ultimate Series and is limited to just 75 units 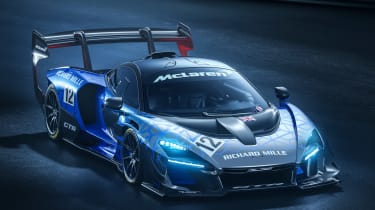 The new limited edition McLaren Senna GTR has been officially released. The £1.1 million track-only hypercar was initially unveiled in concept form at the 2018 Geneva Motor Show, promising to be an even faster, more focused version of the regular road-going Senna. Only 75 models will be built, all of which have been sold.

It’s powered by the same 4.0-litre twin-turbocharged V8 as the standard Senna, albeit with a remapped ECU and a reworked exhaust system. This means the Senna GTR produces 814bhp and 800Nm of torque which, thanks to its dry weight of 1,188kg, gives it a power to weight ratio of 684bhp per tonne. The remaining performance specs are yet to be announced.

The engine feeds its power through a seven-speed automatic transmission to the rear wheels. Launch control comes as standard, along with three powertrain modes labelled ‘Track,’ ‘Race’ and ‘Wet.’ The final setting is a new development for the GTR which is designed for use with wet-weather tyres. 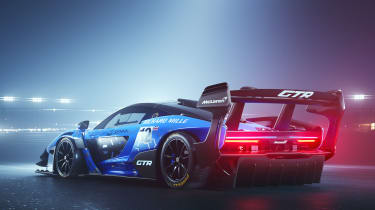 Like the road-going Senna, the GTR features active aerodynamics, capable of delivering more than 1,000kg of downforce at 155mph. Upgrades over the standard car include a reprofiled front splitter, an enormous rear diffuser, new dive planes for the front bumper, sill-mounted vortex generators and a larger LMP1-style rear wing.

Structural upgrades include a carbon-fibre safety cell with an integrated roll cage and a set of harness mounts. McLaren has also fitted the GTR with flared wheel arches front and rear, to accommodate a wider track and larger, 19-inch centre-lock alloy wheels. To save weight, the windscreen and side windows have been swapped for polycarbonate replacements.

Despite taking heavy design inspiration from the firm’s GT3 race cars, McLaren has built Senna GTR with accessibility in mind. The aim of the project was to make 95 per cent of the car’s performance available to 95 per cent of drivers.

To achieve this aim, McLaren selectively ignored the GT3 race programme’s regulations. For example, by ditching the series’s required 18-inch alloys, McLaren has been able to fit larger carbon-ceramic brakes, providing more powerful stopping power. A modified version of the firm’s GT3 suspension, along with a suite of driver aids, promises the same predictability. 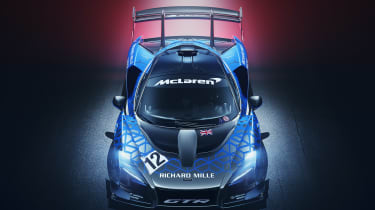 Other accessibility upgrades include anti-lock brakes, a pit-lane speed control system, a tyre pressure monitor, brake pad wear sensors, brake disc-wipe technology, an anti-collision radar and an air brake function for the rear wing, which provides a 20 percent improvement in braking alone over the road-going Senna.

Inside, the Senna GTR gets an FIA-approved carbon fibre racing seat, satin-finish carbon fibre trim, Alcantara headlining, a quick release GT3-inspired steering wheel and a a pared-back digital instrument cluster. Almost every creature comfort has been stripped away in the interest of saving weight, meaning there’s no carpet, no infotainment system and, as standard, no passenger seat.

UK deliveries are due to commence in September this year, with each buyer being given the option of personalising their purchase with a range of McLaren Special Operations accessories. Options include unique MSO paint colours and custom racing liveries.

What are your thoughts on the new McLaren Senna GTR? Let us know in the comments section below… 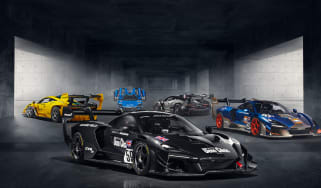