McLaren and Lego join forces to create a 1:1 scale model of the McLaren Senna hypercar 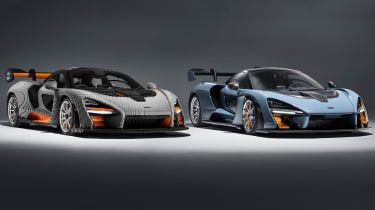 McLaren has revealed a one-off version of its Senna hypercar built from Lego. Consisting of 467,854 Lego pieces a team of 42 completed the scale model in 2,725 hours - nine times longer than it takes to build a road-going Senna.

The model isn’t entirely built from Lego, however, as it’s the first McLaren Lego model to feature the production car’s carbon fibre seat, steering wheel, and even the roof mounted starter button - which starts a simulated engine sound of a real Senna.

The badges, pedals, lights, infotainment system and even the wheels and Pirelli tyres from the real Senna have also been fitted to the model. The famous dihedral doors are built from Lego and also removable to allow people easy access, says McLaren.

Despite largely being constructed from plastic, the Lego Senna weighs 1,700kg - around 500kg more than the production version.

Finished in Victoria Grey with contrasting orange highlight brick-work, the full-size  Senna will be on display at various events throughout the year first appearing at July’s Goodwood Festival of Speed.

If you liked this then click here to look at the life-sized Bugatti Chiron made entirely out of Lego...