With a claimed economy figure of over 200mpg, the new plug-in Mercedes A 250 e is arguably the pick of the range 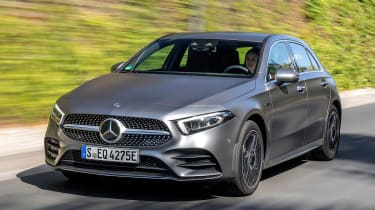 It'd be somewhat crass to suggest the only reason Mercedes has added a trio of plug-in hybrid versions to its small car range is to help it meet upcoming and ever-stringent emissions legislation.

Yet mass-market cars like the new A-Class PHEV will significantly reduce the company’s overall CO2 rating, allowing it to avoid some fairly significant fines. Cars like these also have the potential to usher sizeable tax benefits to those considering buying one when order books open next month.

No other car in this class – aside from the now defunct Volkswagen Golf GTE – offers a useable all-electric range, let alone one of more than 40 miles on a single charge. BMW will add a PHEV version to the new 1 Series range in the near future, but we’ll have to wait a while until Audi offers its latest A3 executive hatch with a plug. 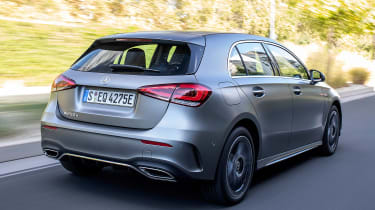 Based on the A 200, the new Mercedes A 250 e gets that car’s turbocharged 1.3-litre petrol engine, mated to a 15.6kWh battery and a 75kW electric motor. Total system output jumps from 158bhp to a not-insignificant 215bhp.

Mercedes claims a WLTP-rated range of 42 miles – equating to a staggering 201.7mpg. That latter figure is somewhat meaningless, however, as with frequent charges you could reasonably run this car for months without filling it up with fuel even once. The fact it emits only 33g/km of CO2 will be more relevant to business users, who will save a fortune in company car tax; for the 2019/20 tax year, it sits in the very lowest BiK bracket.

The A 250 e will charge from 10-100 per cent full in 1hr45mins using a 7.4kW Wallbox. Mercedes says those with access to DC charging (not in the UK for now) can top up from 10-80 per cent in just 25 minutes. Either way, it’ll be easy to recharge overnight or at the office, for example. 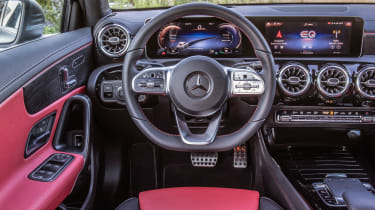 Early plug-in hybrids were sensitive to even gentle throttle inputs, with anything more than a slight prod causing the engine to kick in and the revs to soar. The same cannot be said of the A 250 e; move away from junctions and you’ll be amazed at how far you can push before waking the petrol unit. The instant torque means it feels pretty quick, too, hitting 62mph in a hot hatch-rivalling 6.6 seconds.

The high-voltage battery adds around 150kg to the A-Class hatch, but you only notice this when really throwing the car around. Of course, A 250 e buyers are likely to spend most of their time in stop-start commuter traffic, or running up and down the motorway – where the benefits of the hatchback’s silent running far outweigh the added bulk.

It’s quiet on the move, and can run on electric power right up to 87mph. This is particularly pleasing, because Merc’s Renault-sourced 1.3-litre isn’t famed for its refinement. It sounds particularly thrashy under hard acceleration, which encourages you to prioritise electric propulsion.

There are four drive modes: Electric, Comfort, Sport or Individual. The first is self-explanatory, while Comfort aims to intelligently blend use of the engine and electric motor. Sport keeps the engine fired, while Individual allows you to tune certain aspects of the car to your tastes.

In Electric, you can use the steering wheel paddles to control the level of brake regeneration. There are five settings, but it’s an intuitive system and easy to utilise on the fly; you can effectively slow the car by flicking the left paddles, shaving your speed progressively before bringing you to a halt. Frustratingly, when in Comfort this same process controls the gearbox, causing the engine to fire when driving on electric power. 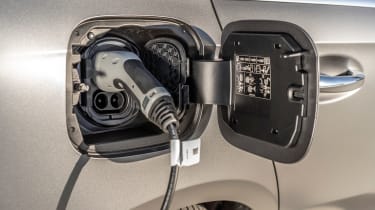 The steering is accurate, but the ride is a mixed bag. It’s never sharp or jarring, but it isn’t as sophisticated as some rivals. Weight plays a part here, but even the outgoing VW Golf feels more composed around town. Early indications suggest all UK A 250 e models will come in AMG Line spec, inevitably issuing bigger wheels and slightly stiffer suspension.

Those specs will be revealed soon, but using the standard A 200 AMG Line as a guide should ensure all cars get 18-inch wheels, a diamond-style radiator grille, privacy glass and sports seats. LED lights, two-zone climate control and keyless go should also be included, while various option packages will bring things like the larger interior screens, augmented reality sat-nav and a panoramic roof.

If the expected £32,500 list price is to be believed, it looks like the PHEV will command a premium of around £3,500 over an equivalent A 200. However, use it as intended (and match the quoted 201.7mpg) and you could save thousands on fuel alone.

The new Mercedes A 250 e isn’t perfect; the ride is a little firm and the petrol engine isn’t particularly smooth. But none of that will matter when you look at the numbers, which are sure to entice a throng of junior execs into this stylish and desirable plug-in hybrid. It offers a usable range, a quiet and refined electric powertrain, and huge fuel and tax savings to boot. Ignoring the fact it currently has no direct rivals, this is the most convincing A-Class to date.