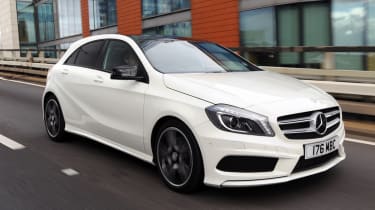 The Mercedes 220 CDI is likely to appeal to keen drivers with an even keener eye on running costs. And it does deliver to some extent, although a manual gearbox option would be nice. However, if you’re entertaining the thought of a diesel because you drive plenty of miles, while the aesthetics of the sportier A-Class hit the spot, it’s really worth trying to be objective about the ride comfort the car does (or doesn’t) offer.

Until the A45 AMG arrives at the Geneva Motor Show in March, the most potent member of the new A-Class family is the 208bhp A250 petrol. But if diesel power is a must, then there’s the 220 CDI, which is only available in AMG Sport and even sportier ‘Engineered by AMG’ trim levels.

In exchange for your £27,170, you get an A-Class with 18-inch wheels, which hide silver brake calipers and sports suspension that's 15mm lower than the standard A-Class. This was enhanced on our test car by the addition of the Night Package – a £1,290 extra which adds really smart gloss black window surrounds, different alloys and bi-xenon headlights.

As with all new A-Class’s, the roofline of the new version is 160mm lower than the old car, but add in the sporty extras and this A-Class successfully takes the new contemporary look to a greater extreme than models lower down the range.

The interior is treated to some extra goodies, too, including a sports multi-function steering wheel and supportive sports seats - although we’re not sure about the carbon-fibre-look trim that covers the lower half of the dash and feels a bit scratchy.

The A220 CDI is powered by Mercedes’ 2.1-litre turbodiesel engine. It develops 168bhp but, more importantly, the same 350Nm as the petrol unit in the A250 manages. For a Mercedes engine, the diesel is surprisingly vocal in this car, whether at low revs around town or at higher speeds, where roar from the low-profile tyres also becomes intrusive. However, the torque ensures surging overtaking pace and flexibility.

The only gearbox option is the seven-speed dual-clutch auto, which isn’t especially smooth when compared with the six-speed manual available on other A-Class’s or Mercedes’ excellent seven-speed auto that's fitted to its larger models. The stop-start system is also less smooth when fitted with the dual-clutch, rather than the manual transmission.

The sports suspension of the 220 CDI lowers the car and gives very sharp handling and limited body roll, while the extra rubber gives loads of grip. However, the ride is really a cause for concern and buyers should ensure that they can live with the extremely firm suspension setup that shakes passengers around the cabin with almost comical force.

Even small lumps and ridges bump and bang through your seat. You never feel out of control, as the steering wheel doesn’t fight back too much, but the ride is just too firm on UK roads.