Mercedes A-Class has been updated, and we try the A 250 AMG - the hottest front-wheel-drive model 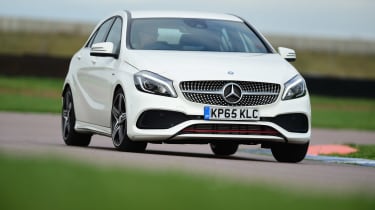 Mercedes’ latest AMG models deliver improved handling to go with their stunning straight-line pace, but unfortunately the A 250 AMG falls a little short in both areas. If you must have a front-drive AMG machine, it’s your only option, but it’s not the fastest hot hatch around, and the inert handling is a bit of a disappointment. However, the manual gearbox is good to use and, if you can live with the firm ride, the A 250 is a well equipped premium hatch with a sporty edge.

The Mercedes A-Class reinvented itself as a stylish executive hatch when the third generation was launched in 2012, but now Mercedes has given the range a bit of an update. The exterior revisions are subtle, chiefly introducing new lights front and rear, although the engine range has been tweaked to deliver greater efficiency, and the model line-up has been rejigged, too.

One change is the car driven here, the A 250 AMG, which is essentially the hot hatchback of the range. It replaces the outgoing Engineered by AMG model, and slots in below the four-wheel-drive A 45 AMG in the line-up. It uses a detuned version of the A 45 AMG’s 2.0-litre turbo petrol engine, dropping power from 381bhp to a front-drive-friendly 218bhp, but, perhaps more significantly, the A 250 now comes as standard with a six-speed manual gearbox. 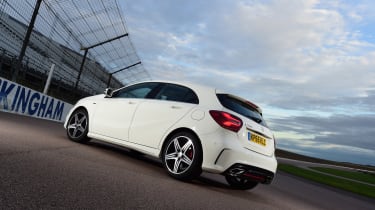 Externally, there’s not much to give away that this is a faster A-Class. It looks sporty enough, and highlights include the diamond-pattern grille, red stripes set low into the front and back bumpers and 18-inch AMG alloy wheels, but aside from the badge on the bootlid, the A 250 isn’t much different to the lower-spec AMG Line models.

The cabin is well finished, with carbon-effect plastic on the dash, red-ringed air vents, sports seats and red seatbelts, while detail touches such as the colour-changing LED lighting in the headrests, doors and cup-holders add a funky touch. Everything has a high-quality feel, and it delivers a good mix of sportiness and comfort. 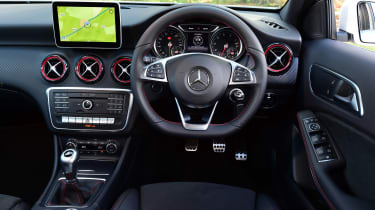 However, the A-Class still isn’t as spacious as its rivals, and rear passengers will feel cramped, as legroom is taken up by the front sports seats, and the small windows make you feel hemmed in, too.

Fire up the 2.0-litre turbo, and there’s a muted rumble from the exhausts, plus it has a bassy tone throughout the rev range. The six-speed gearbox has a weighty shift and is precise, although the box doesn’t like to be rushed, so it’s best to rely on the engine’s 350Nm of torque.

This is available from 1,200rpm, but the A 250 seems to thrive on revs, and on the road the car comes alive the higher you are in the rev range. 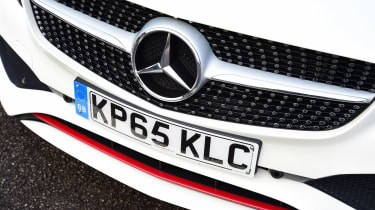 An output of 218bhp is pretty modest for a hot hatch these days, but the A-Class feels quick enough, and encourages you to press on and make the most of the power on offer.

There’s plenty of grip in corners, and the stiff suspension limits body roll very well, while the steering reacts quickly to inputs. However, the chassis set-up is geared towards safe handling rather than excitement, and the A 250 resorts to understeer when reaching the limits of grip. 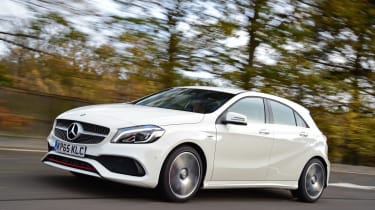 Power delivery through the front wheels is compromised, too, because there’s no limited-slip differential or trick electronics to boost traction, and getting on the power early sees the nose push wide on the exit of corners. At least the steering is responsive, and feedback is reasonable.

That stiff suspension does affect driving comfort. While the A 250 is well damped and doesn’t crash over bumps and potholes, the stiff chassis does tend to follow the road surface. Mercedes does offer adaptive dampers for £595, which should help broaden the car’s ability.