The updated Mercedes A200d premium diesel hatch is well equipped, but what’s it like to drive? 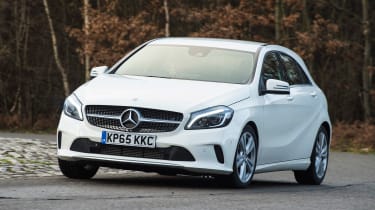 For some buyers, the mere fact that the A-Class has a Mercedes badge on the nose will be enough to seal the deal. But, while this car is a great-looking premium hatch, it comes up short in many areas. This A 200d Sport isn’t as much fun to drive as some rivals, while the gruff diesel engine and sluggish automatic gearbox aren’t an inspiring combination. At least you get some luxury touches for your money, yet this still isn’t enough for it to earn more stars.

When it was launched in 2012, the third-generation Mercedes A-Class marked a sea change for the German brand’s smallest model. Gone were the upright MPV lines of its predecessor, replaced by swoopy, low-slung bodywork designed to attract buyers away from rivals such as the Audi A3 and BMW 1 Series.

On the whole, the latest A-Class has proven a hit in showrooms, but as Mercedes is updating and revising its entire range with a new naming policy, the car has been given a bit of an update to keep it competitive. We’ve already tried the A 250 AMG, and now we’ve got our hands on the A 200d Sport. Under Mercedes’ new naming structure, the A 200d is a diesel-powered car featuring a 2.1-litre four-cylinder engine under the bonnet. It delivers 134bhp, and when paired with a seven-speed automatic gearbox, can sprint from 0-62mph in 8.8 seconds. It’s also pretty efficient, with CO2 emissions of 108g/km making company car costs reasonable. 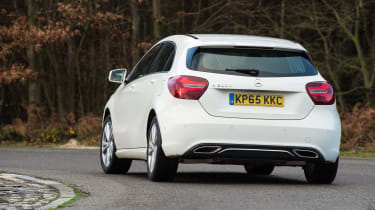 Unfortunately, the diesel unit is noisy, and while there’s plenty of sound insulation to keep the cabin relatively quiet, the engine’s metallic noise isn’t particularly pleasant. In most situations, the seven-speed auto shifts smoothly, with no jerkiness when kicking down. But the gearbox can get flustered if you suddenly press the throttle – when pulling on to a roundabout, for example. It causes some hesitation when accelerating, while the long throttle travel compounds the problem.

Mercedes’ Dynamic Select driving mode system is standard, with Eco, Comfort, Sport or Individual modes for the throttle and steering to choose from – the car only really comes alive in Sport mode, though. Only then does it feel responsive, but whichever driving mode you choose, you’re stuck with the same fidgety ride from the suspension.

This Sport model is sporty in name alone, because, while the suspension is on the firm side, it doesn’t make for sharp handling. The car feels heavy and slow to respond in corners, tending to understeer when you push on. The gearbox exacerbates things, as it kicks down all too readily, and while there are paddles for you to take manual control, the car’s electronics will override if it thinks you’ve stopped concentrating. 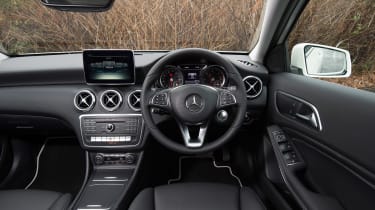 At least you’re afforded plenty of luxuries on board, as you get artificial leather, climate control and a reversing camera as standard. Features such as the illuminated door sills and chequerboard dash trim add an upmarket touch, while the £1,695 Premium Package is worth the extra money. It brings sat-nav, heated front seats, LED headlamps, 12-colour ambient lighting and more to make the A-Class feel more classy.