Mercedes B-Class prices have been released, with the new MPV starting at £26,975

The B 180 and B 200 petrols come with seven-speed dual-clutch automatic gearboxes, while the B 200 d and B 220 d get an eight-speed dual-clutch auto instead. Four-wheel drive will be introduced at some point in 2019, although it’s likely to be restricted to only the top-end diesel edition. 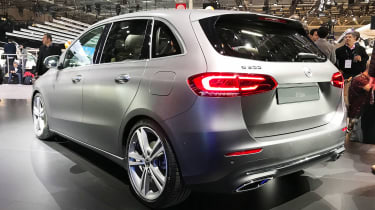 Optional equipment is available in packages, and provides a range of technology and driver assistance additions. For £1,695, customers can spec the driver assistance package, which adds active braking assist, blind spot assist, lane-change assist and an automated emergency stop function.

The all-new Mercedes B-Class officially broke cover at October’s Paris Motor Show, with the aim of strengthening one of Mercedes’ weaker badges. It is based on the same platform as the new A-Class, yet it has still been designed to offer a higher level of practicality compared to its stablemate. Saying that, it is clear Mercedes has worked on the overall shape of the B-Class to try and overcome customer prejudice for boxy MPVs.

The end result is a car that’s more similar in principle to the likes of the Golf Plus or even BMW’s 2 Series Active Tourer; the B-Class looks like an A-Class with a slightly taller roofline and a steeper rear hatchback, instead of a full-on people carrier. And its particularly short rear overhang does a good job of disguising its sharper focus on practicality. 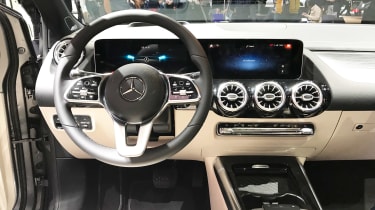 In a bid to improve cabin space, the B-Class’s wheelbase is 2,729mm - around 30mm longer than the A-Class’s. And despite its more conventional profile, the B-Class manages to roughly match its predecessor on interior space. Mercedes says that by the middle of 2019 it will offer the car with a sliding second row of seats, which can be moved fore and aft to prioritise boot space or rear legroom.

The boot capacity with the seats in place can therefore be adjusted between 455 litres and 705 litres - and if you fold the second row down completely, there are 1,540 litres on offer. Merc also plans to offer a fold-flat front passenger seat back to help accommodate longer items but it, too, will not be available until the middle of 2019. The tailgate can be powered, as an option, and this feature can extend to gesture activation using a foot waved below the rear bumper.

What do you think of the new Mercedes B-Class? Let us know in the comments below…