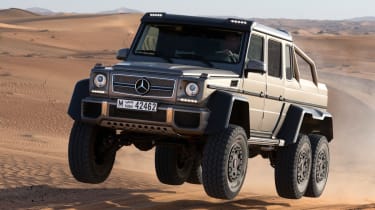 There’s very little justification for a car like this on the road, but the G63 6x6 is so well engineered, it’s impossible not to love it. It’s unstoppable and fast over rough terrain, easy to drive, sounds great and is surprisingly luxurious on the inside. If you like to be noticed – important for those who can afford the outrageous price – nothing comes close.

With a massive 536bhp of twin-turbocharged AMG V8 power, a kerbweight of nearly four tonnes and no less than six driven wheels, the Mercedes G63 AMG 6x6 is the most outrageous car Auto Express has ever tested.

Originally manufactured for the Australian army in 2008, it’s now had an AMG makeover. It will go on sale later this year.

Despite its military vehicle roots, the G63’s four-seat interior is as luxurious as Mercedes get. The only thing missing is a ladder to climb into the towering cabin, raised on huge 37-inch wheels.

Despite the car’s gargantuan size, the V8 engine hauled us through the Dubai desert at alarming speed. Mercedes claims 0-62mph in less than six seconds, and the 6x6 feels and sounds every bit as fast as that.

The real surprise is the way this car drives – it’s genuinely nimble, yet still comfortable, and it takes a seriously large bump to throw it off your intended line. In fact, the only chink in its armour is the slow steering ratio – a characteristic of the regular G-Class 4x4 on which it’s based.

On a rough and winding desert track, we followed an ML63 AMG that was being driven hard. It was drifting and sliding all over the road, and getting thrown sideways over ruts and sand piles.

But the G63 6x6 just sat behind calmly, being held up by the more modern car. Even when we eased off a few times, it wasn’t long before we’d caught up.