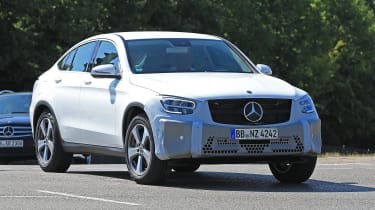 Mercedes is working on an updated version of its GLC Coupe, as these latest spy shots show prototypes undergoing development testing in Germany.

Expected to arrive in the UK in the middle of next year, the GLC Coupe will benefit from a range of mechanical and cosmetic tweaks in a bid to keep in fresh against the segment’s latest arrival, the all-new BMW X4.

What should give the GLC Coupe the upper hand initially is the introduction of plug-in hybrid technology for the first time, which will also be offered on the regular GLC. There will also be updates to the existing petrol and diesel engines to help improve efficiency and reduce CO2 emissions. 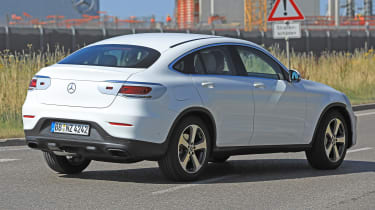 It’s unclear as to which plug-in hybrid powertrain Mercedes will offer in the GLC; a new diesel-electric powertrain was recently launched in the updated C-Class combining a 2.0-litre four-cylinder diesel and 121bhp electric motor. Mercedes claims CO2 emissions are as low as 38g/km in the C-Class.

Visual changes to the GLC Coupe will be less dramatic with the German firm taking a similar approach to the SUVs makeover as it did with the updated C-Class. Recent spy shots have shown a new set of LED headlamps and redesign taillights will be the standout changes.

Inside you can expect a set of new digital dials in place of the analogue setup behind the steering wheel, while a new widescreen display on the dash will give access to Merc’s suite of infotainment features such as live traffic updates and Apple CarPlay.

What do you make of the Mercedes GLC spy shots? Let us know in the comments section below… 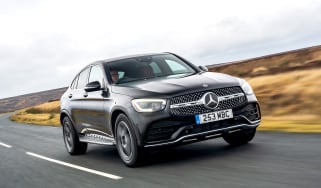