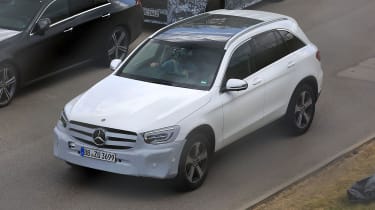 The Mercedes GLC facelift has been spotted testing before it hits showrooms in around 12 months’ time. Many of the changes should mirror those introduced to the recently updated C-Class, so expect improved interior tech and, for the first time in the UK, a plug-in hybrid version.

The light disguise of this test mule shows that styling upgrades are subtle. There’s a revised design for the front grille, the headlights feature new lighting graphics, and the bumpers will receive minor tweaks.

Inside, the changes focus on an updated infotainment system. Our spy pictures show a larger 10.25-inch screen placed on top of the dash, and the old car’s click wheel, located on the centre console, has been ditched for an A-Class-inspired touchpad. Expect more touch controls on the steering wheel, and the option of a 12.3-inch digital instrument panel in place of traditional analogue dials. 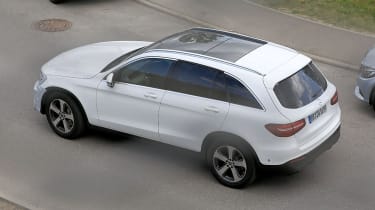 The revised GLC should get a refreshed range of engines, using at least some of the powerplants from the C-Class. The most significant could well be a plug-in hybrid, which will be available for the first time in right-hand drive. It's likely to be badged GLC 350 e, and should mix an electric motor with petrol power - although Mercedes could choose to also offer the new diesel-electric PHEV that's being introduced in the revised C-Class.

Whatever the fuel type, the hybrid GLC will lose some of its boot capacity; expect the regular car's 550-litre loadbay to take a 40-litre hit to make room for batteries beneath the floor.

Traditional petrol and diesel GLC variants will continue, sharing the many of the same 2.0-litre units recently introduced to the C-Class.

What do you make of the Mercedes GLC spy shots? Let us know in the comments section below… 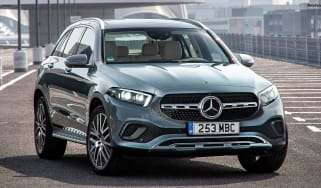