Like it or not, British drivers love SUVs. Sales of the urban 4x4s have doubled in the last five years, and the trend shows no signs of slowing down. All of which makes the Mercedes R-Class' job of tempting people away from their off-roaders even harder. 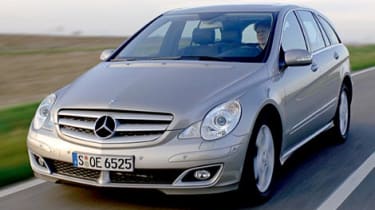 The R320 CDI is certainly the pick of the R-Class range in terms of running costs, but any way you look at it, Mercedes' new MPV is an expensive proposition. It doesn't have the imposing stance of some SUV rivals, but there is more interior room and a real air of quality about it. The handling is the only thing that really lets down the overall package.

Like it or not, British drivers love SUVs. Sales of the urban 4x4s have doubled in the last five years, and the trend shows no signs of slowing down. All of which makes the Mercedes R-Class' job of tempting people away from their off-roaders even harder.

Auto Express has already driven the R350 and R500 petrol versions of the radical people carrier, but now the German firm has introduced a diesel version to the line-up, featuring the 3.2-litre CDI V6 power-plant. Mercedes is hoping that the oil-burner's blend of performance and economy will help lure UK motorists to showrooms when the R-Class goes on sale next April.

Essentially a luxury people carrier, the R-Class promises to combine the space and practicality of an SUV with the premium badge and feel of models such as the Range Rover, BMW X5 and Mercedes' own M-Class -- with which the R-Class shares its platform.

First impressions are dominated by the sheer size of the firm's latest creation. It's very imposing, with a bold chrome-trimmed grille and huge headlights. Take the long stroll around to the rear, and you'll find two large chrome tailpipes, which add a sporting feel to its appearance.

By far and away the newcomer's finest attribute is its spacious interior. Unlike many vehicles which claim to be six or seven-seaters, the R-Class will comfortably swallow six full-sized adults and some of their possessions. Unfortunately, the UK won't be getting the even longer stretched wheelbase version, as the extra 23.5cm makes a huge difference when it comes to getting in and out of the back.

Mercedes has been criticised in the recent past for the poor fit and finish of its interiors, but the R-Class's cabin is definitely a return to form. Everything has the quality feel you would expect from a car in its price range.

The R320 CDI's massive 510Nm of torque towers over the amount produced by its petrol-engined R350 and R500 siblings, and it translates into impressive straight-line pace. Despite the people carrier's weight, purposeful acceleration is possible in all seven ratios of the automatic gearbox, so overtaking is stress-free. The R-Class is most at home on the motorway, and it feels as if it could cruise effortlessly all day, while a claimed 30mpg combined economy figure is impressive for such a bulky machine.

However, take the big Merc out of its comfort zone, and its weight and girth start to have a negative effect. Even with the suspension switched to Sport mode, the MPV wallows noticeably around tight bends, making the manufacturer's claims that the R-Class has something of a 'sporting estate' feel about it seem unrealistic.

Mercedes admits that more than half of the R-Classes which will be built are going to be sold in America, but with the introduction of the economical R320 to the line-up, it now appears to be a rather more realistic proposition for British buyers as well.