The R-Class MPV is a steal second-hand, but it is expensive to run 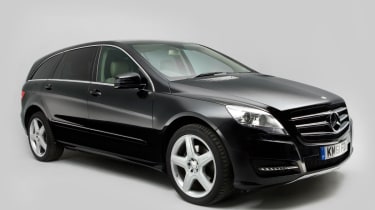 The R-Class was conceived with the US market in mind, so it was inevitable that something would get lost in translation to Europe. Yet despite the fact it proved such a slow seller, the R-Class is still well worth a closer look if you’re after a spacious estate or people carrier that’s unusual, luxurious, fast and refined – and which also offers seating for up to seven.

Crossovers that combine elements from different types of cars are nothing new, but the Mercedes R-Class took this concept to extremes.

In fact, with MPV seating capacity, 4x4 capability, estate practicality and limousine-like luxury, it’s no wonder Mercedes had big hopes for this model.

But high purchase prices, awkward styling and the car’s size put buyers off, guaranteeing greater exclusivity than Mercedes would have liked. Now, you can buy one for less than £10,000.

So, while running costs are high, if you’re after a spacious, versatile and posh people carrier, there’s nothing else quite like it.

From this point on, engine options were pared back to only the R300 CDI and new 265bhp R350 CDI V6 turbodiesels.

Upmarket people carriers are rare, but posh estates and SUVs are plentiful. If you must have at least six seats, your best bet is to opt for a 4x4 like the seven-seat Land Rover Discovery.

The BMW X5 can also seat seven – although the third-row seats are cramped – plus, it’s superb to drive and well built. The Audi Q7 and Mercedes GL are beautifully built seven-seat SUVs, too. They’re no longer than an R-Class, but they’re even thirstier, thanks to raised ride heights and bluff noses.