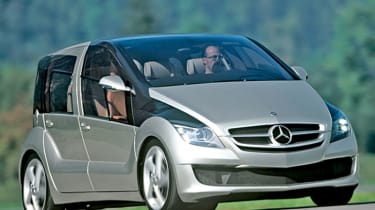 Our first taste of the F600 proved the new Mercedes is a fascinating demonstrator, and one that brings the future of the motor car a step closer. Global production of hydrogen is 45 million tonnes annually, and it’s thought about a million gas-powered cars could run for a year on only one per cent of that. We may not be filling up with hydrogen just yet but, as the F600 proves, it won’t be long until we can.

There’s a sense of expectation in the faces of the German engineers pulling the covers off the angular body of the priceless F600 Hygenius. This the first chance for Mer­cedes’ most secretive employees to confirm that the car they built for last October’s Tokyo Motor Show is more than just a lump of clay; it’s an incredible piece of technology, too.

To prove it beyond doubt, the people removing the disguise are also set to take the car on the road – and Auto Express is the first magazine to join them.

Aimed at the likes of Honda’s stunning FCV concept (also revealed at the Tokyo exhibition), the one-off, hydrogen-powered Mercedes is so valuable we have to take the passenger’s chair. But that doesn’t mean our test will be limited to the carefully sculpted interior and distinctive seating.

In the metal, the car is oddly beautiful. Its sharp bodywork catches the light, while the airy cabin, with its huge glass area, resembles a futuristic take on the Renault Espace.

But the most spectacular achieve­ment is the space. Due to the size of the com-pact hydrogen fuel cells, not an ounce of room goes unused. Passenger space extends nearly from corner to corner.

The seats have clever floor mounts so they can spin round or be shunted back and forth. Those in the front can face the rear, or even slide right into the back of the cabin. Even from the passenger’s seat, it’s easy to see that the F600 isn’t only well put together – it’s relaxing to drive, too.

The Mercedes purrs away from the line effortlessly, and its electric motors hold enormous reserves of torque. A strong new battery is in part respon­sible for the performance, because it reduces the demands placed on the fuel cell itself. Parking and low-speed manoeuvres are executed using only the battery, as in the Toyota Prius.

Another special invention is a small hydrogen ‘turbocharger’ reputed to be the first of its type. It forces more gases through the engine, upping power.

The performance figures are interesting. The experts say the F600 converts nearly 59 per cent of its hydrogen fuel into forward motion, which means the unit is a match for a petrol engine in terms of energy efficiency. It has a 248-mile range, covers 0-60mph in 11.7 sec-onds and hits a top speed of 105mph.

If you ignore the radical cabin, it’s more like a normal car than we expec­ted. But the F600 is in the early stages of develop­ment, so don’t place an order yet. You could be in for quite a wait.