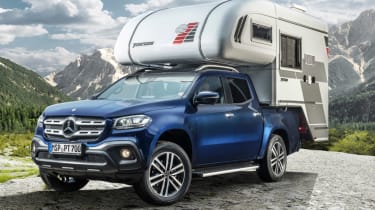 Mercedes has set out to prove that its new X-Class is versatile, and to that end the German marque will present its new pick-up truck in camper van form at the Caravan, Motor, Touristik (CMT) show in Stuttgart next week.

With assistance from caravan specialists Tischer, The X-Class can now sport a detachable cabin, mounted in the loading bay and extending over the roof of the truck. The alcove over the roof is a sleeping area 1.5 metres wide, while the main compartment boasts two metres of headroom. Three seats are inside, which can be converted into a second bed too.

Though there aren’t any photos of the cabin’s interior, an integrated bathroom is part of the cabin, with a foldaway wash basin and swivelling toilet unit. With the two stowed away, there’s enough room for a shower, and a simple three-burner stove makes up the kitchen. 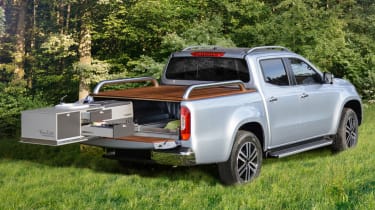 Alongside the X-Class camper module, a second X-Class camping concept will be presented, which was developed by VanEssa mobilcamping.

It’s a heavy duty, fully equipped kitchen. The pull-out module features complete cooking and washing up facilities, including a sink, coolbox, drawers for cutlery and crockery, as well as an all-important burner. It weights in at a hefty 250kg, and is protected by a yacht-deck inspired load cover.

Does the X-Class strike you as a useful camping tool? Tell us your thoughts in the comments below!