Based on the Nissan Navara, the new Mercedes X-Class aims to bring ‘premium’ to the pick-up market 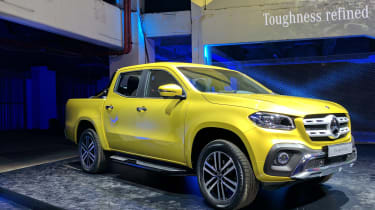 Mercedes has a history of producing vans for the commercial vehicle market – but now the firm is branching out further with its new pick-up, called the Mercedes-Benz X-Class. It’s due on sale in November 2017 with prices opening at around £28,000.

The X-Class is the result of a parts-sharing deal between Mercedes and the Renault-Nissan Alliance – so it’s based on the ladder-frame platform of the Japanese brand’s Navara pick-up that will soon also bring us the Renault Alaskan. Mercedes has made significant modifications right across the board, however, in a bid to produce a pick-up that it deems worthy of the three-pointed star – and a significantly inflated price tag.

It’s a strategy Mercedes-Benz has employed before in the commercial vehicle market with its Citan van sharing much with the Renault Kangoo. The key for Mercedes is to create distance between the Navara/Alaskan and the X-Class by building in a higher level of quality and technology that will convince buyers that the X-Class is worth paying the Mercedes-Benz premium for. 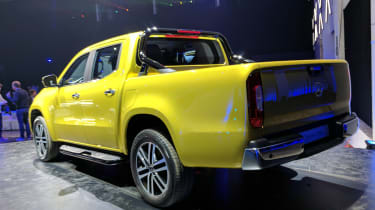 Speaking to Auto Express at the launch of the X-Class, Head of Mercedes-Benz vans Volker Mornhinweg explained that the "X-Class will redefine the pick-up into a true premium vehicle". Before outlining the opportunity Mercedes sees in the global pick-up market. "Look back in time and compare what has happened to SUVs. They were rough and tough vehicles and now they're family cars. The same could happen with the pick-up".

Mercedes estimates that that the global pick-up segment will expand to the tune of 1m units by 2026, an uplift of 43%. The UK market is expected to be roughly stable, only accounting for 4% of that growth but markets such as Australia, Latin America and South Africa are set to turn to mid-sized pick-up trucks in a big way.

The Nissan was already one of the biggest pick-up trucks on the UK market and at 5,340mm, the X-Class is 40mm longer than its sister vehicle. More tellingly, it’s also 70mm wider at 1,920mm and a height of 1,819mm makes it 21mm lower than the Navara too - evidence of Mercedes’ design team striving for that powerful road presence to mark the X-Class out.

The extra width helps the X-Class accommodate a wider track front and rear that works with a 10mm lower ride height to boost stability as well as that all-important stance on the road. It also boosts cabin space with passengers getting an extra 25mm of shoulder room in the Mercedes.

The X-Class’s side profile is very close to the Navara’s but there are subtle changes throughout. The cleaner design is intended to accentuate the short front overhang and the long one at the rear for a more dynamic look. The front end is distinctively Mercedes, with an oversized grille similar to that found on the marque’s SUVs and a large three-pointed-star badge. Around at the rear there’s the chunky bumper with its integrated step as seen on the Navara, but this can be deleted by customers who need the tailgate to swing down beyond the standard 90 degrees.

As you ascend the X-Class trim level range that runs from Pure through Progressive to Power, the X-Class gains progressively more chrome and body-colouring at both ends. The aim is to move away from the pick-up’s working vehicle roots, positioning is as more of a stylish utility vehicle. It’s what the market wants and what Mercedes feels it’s well placed to deliver. Indeed, Mercedes expects the entry-level Pure derivatives to account for just 2% of sales in the UK with the top of the range Power model taking 60%.

The X-Class engine line-up is based on four and six-cylinder diesel motors. The X 220d (161bhp) and X 250d (188bhp) use the same 2.3-litre four-cylinder diesel in single and twin-turbo form respectively. Both of these engines get a six-speed manual gearbox as standard, but a seven-speed dual-clutch automatic is offered as an option on the higher-powered unit. 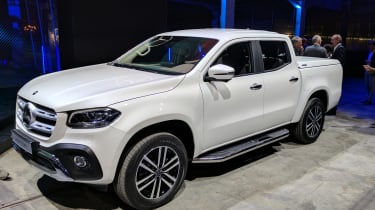 By next summer a V6 diesel will have joined the line-up in the X 350d, offering 255bhp and paired up with permanent four-wheel drive and a 7G Tronic automatic gearbox. It will also come with Mercedes’ Dynamic Select as standard, offering the ability to switch between Comfort, Eco, Sport, Manual and Offroad driving modes – a first for the pick-up segment. A part-time four-wheel-drive set-up will be fitted to the remainder of the range; UK buyers won’t be offered the rear-drive editions that are available elsewhere or the X200 petrol model.

Like its Nissan Navara sister vehicle, the X-Class uses double wishbone front axle and, unusually for a pick-up, a multi-link rear suspension. Mercedes has developed a bespoke suspension set-up, stiffened areas of the ladder frame chassis and added a faster steering ratio, all to try and replicate some of the comfort and driving dynamics its passenger cars are known for. The X-Class is also the only pick-up to offer internally vented brake discs on all wheels as standard. The front axle has 320mm discs and there are 308mm items at the rear.

All X-Class models are rated for loads of up to 1.1 tonnes – sufficient for 17 full 50-litre beer barrels, Mercedes claims, and more than enough to make the car eligible for commercial vehicle tax classification. All UK X-Classes will be capable of towing up 3.5 tonnes, too. Inside, the X-Class gets plenty of familiar Mercedes cues, along with some harder-wearing materials. The firm’s 8.4-inch infotainment system (as seen in the V-Class) is mounted in its usual position in the centre of the facia, offering Garmin-based navigation across the range. 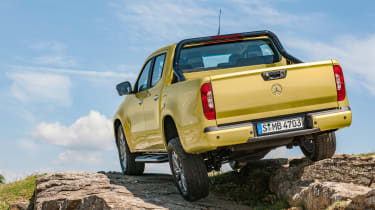 On mid and high-spec models, there’s a further 5.4-inch display between the instrument dials. Mercedes has already taken several hundred reservations for the X-Class in the UK, despite there being no official confirmation on pricing yet.

However, the car – which will be built by Nissan at its plant in Spain – is expected to cost from around £28,000 excluding VAT. The first British customers should get their cars in November 2017 and we’ll get behind the wheel for the first time in October.

Would you consider buying a Mercedes X-Class in the UK? Tell us what you think in the comments section below! 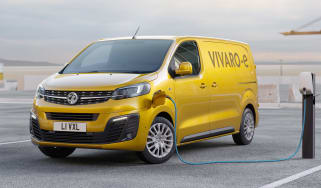 All-electric Vauxhall Vivaro-e added to firm’s van line-up, with a maximum range of 188 miles and a one-tonne towing capacity