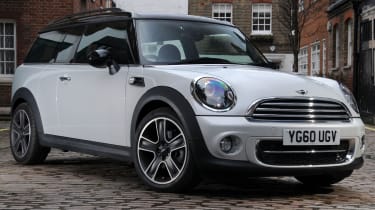 The new MINI Clubman 2014 six-door concept has made its offical debut at the Geneva Motor Show.

It has a much more stylish design than the current model, and the tiny, rear-hinged, third ‘Clubdoor’ – which was fitted on only one side of the car – has been replaced by a traditional four-door layout.

The two rear ‘barn-doors’ remain to provide access to the boot, making the Clubman a six-door car. Incorporating a proper set of rear doors has affected the dimensions, making this concept 260mm longer than the current Clubman. It’s 187mm wider, too. These are big gains, considering the new three-door hatch is only 98mm longer than its predecessor. 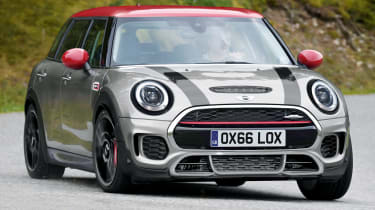 The new UKL1 platform on which the MINI is based is easily stretched, and bosses have already told us that the forthcoming five-door hatchback and Clubman will feature longer wheelbases than the regular model. The styling is textbook MINI from the front, featuring the round headlights and floating grille with which we’re already familiar.

There’s a slightly sportier profile, with a sloping roofline and less upright rear end. The tail-lights are mounted horizontally, rather than vertically, for only the second time on a MINI – the first time was on the Paceman. The Clubman badge now runs across both boot doors. Inside, MINI is claiming that there’s space for five adults.

We’re also expecting more room in the luggage area than in the current Clubman, which has a measly 260 litres of storage space. The concept’s interior probably doesn’t reflect what we’ll see in the production car – the final design will look near-identical to the three-door’s.

Instead, MINI is promoting its quality finishes and future technology. Wood, leather and metal are used throughout, with attention to detail provided by small touches such as Union Jack-embossed buttons on the seats. The central screen, meanwhile, adapts the information it displays depending on what’s going on ahead of the car. 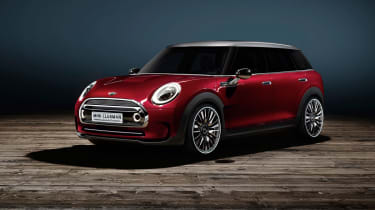 This concept previews the sporty Cooper S model, fitted with large alloys and the trademark twin exhausts. No engine details have been released, but the S will almost certainly be powered by the same 2.0-litre turbo as the hatch. The Cooper and Cooper D Clubmans will get 1.5-litre three-cylinders, returning around 55mpg and 75mpg respectively.

Even though MINI has revealed the Clubman concept first, we’ve been told to expect the five-door hatch to arrive first, later this year. The Clubman, meanwhile, should be available towards the beginning of 2015, priced from around £15,000.

Although it’s supposed to be more practical than the MINI hatch, the current Clubman has always required compromise – especially for UK drivers. That’s because its third ‘Clubdoor’ is fitted only to the right-hand side of the car – so once the rear passenger has hurdled the driver’s seatbelt, mounted to the third door, they spill out of the car into traffic if you’re parallel parked.

Add in the fact that the boot’s 260-litre capacity is only eight litres bigger than that of a Hyundai i10, and it’s clear the Clubman is more style than substance. However, the new model is set to change all that, as it has four conventional doors and a longer wheelbase. MINI now sees the Clubman as a genuine rival to cars such as the VW Golf Estate. 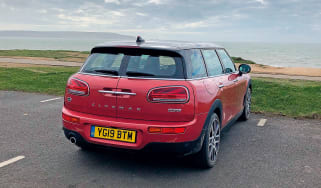 Third report: Our MINI Clubman is a delight on a last-minute trip to the coast
MINI Clubman review

The MINI Clubman is a fun, small estate that's well-built and powered by a great range of engines – but it's not that practical
New MINI Clubman Cooper 2019 review 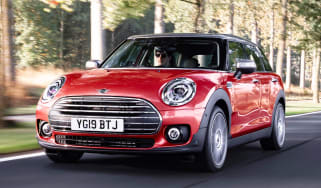 The MINI Clubman has been refreshed with subtle exterior tweaks and a revised engine line-up, but it remains an oddball choice