Named after a Swiss ski resort, the new Mitsubishi Engelberg Tourer Concept has made its debut at the 2019 Geneva Motor Show

Mitsubishi’s big debut at the Geneva Motor Show is the Engleberg Tourer, a concept to showcase the firm’s direction for both its future SUV family and its plug-in hybrid tech.

The Engleberg, which is named after a Swiss ski resort, sports a bold, boxy shape which, combined with details like the front and rear skid plates, gives a typically imposing SUV look.

The front end carries the latest interpretation of the brand’s ‘dynamic shield’ grille, which itself features moveable shutters to reduce drag for maximum efficiency. Further aero touches include a sleek roof box equipped with LED fog lights, and huge alloy wheels with a flat, disc-like surface. 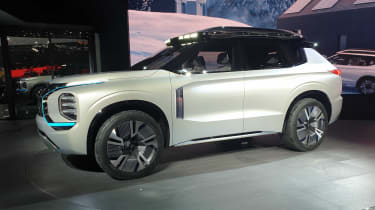 Under the skin, the Engleberg Tourer’s powertrain shares some parts - like the 2.4-litre petrol engine - with the Outlander PHEV. Like the Outlander, the petrol unit acts a generator for the most part, sending drive to a pair of electric motors, one mounted in the front and the other in the rear.

However, the Engelberg Tourer features a significantly larger battery than the current Outlander, which has a 20kWh capacity. This means that the Engleberg Tourer is able to cover 43 miles on battery power alone when tested to the current WLTP standards. When the combustion generator comes into play, the overall range extends to 435 miles.

The battery pack is stored between the front and rear axles, and beneath the cabin floor. The Engleberg has a permanent four-wheel drive system, which is mated to a torque vectoring system which can brake individual wheels and adjust the rate of output from the electric motors.

Welcome to our Geneva Motor Show hub page, scroll down for all our Geneva content...
Mitsubishi's UK exit: full details and what it means for owners