For car buyers, choosing an MPV is the equivalent of preferring an evening in front of the telly to a night out clubbing. It says that your days of youthful freedom and style have given way to sensible practicality. Suddenly, seven seats and cubbyholes are more important than cutting-edge looks and blistering performance. 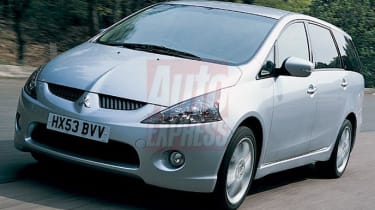 When it comes to making an MPV desirable, the Grandis shows what can be achieved with lateral thinking. Its funky looks and clever interior will find favour with enlightened buyers. But the petrol/auto mix won't. Next year's diesel will be a better bet for UK buyers, and should light the way for success.

For car buyers, choosing an MPV is the equivalent of preferring an evening in front of the telly to a night out clubbing. It says that your days of youthful freedom and style have given way to sensible practicality. Suddenly, seven seats and cubbyholes are more important than cutting-edge looks and blistering performance.

Could the Mitsubishi Grandis mean you can keep the cup-holders and your credibility? With big 17-inch alloy wheels, dark-tinted glass, a chiselled nose and angular headlamps taking cues from the rally bred Lancer Evolution VIII, this people carrier screams 'blinging' rather than 'minging'. It's distinctive, modern and, dare we say it, a lot cooler than many of its rivals.

Yet despite the in-built trendiness, Mitsubishi has kept the model true to its MPV roots. It is genuinely practical, either as a six or seven-seater, while the space-age dash is smart and logically laid out, if a little cheap feeling.

With the rear seats up, the Grandis offers a reasonable amount of load space. But if more is required, then the chairs fold away into a secret floor compartment, giving a flat boot.

But that's not the end of the Mitsubishi's trickery, thanks to the cleverly named 'Hide and Seat' system. The rear pair can also be flipped up and turned round, providing a handy sheltered bench to sit on while removing muddy boots or watching outdoor events. It is a novel idea, and is certain to appeal to active family types.

The handling and ride quality are also rewarding. There's a bit of bounce from the rear end on less-than-perfect surfaces, but overall the Mitsubishi's chassis feels responsive and surprisingly agile for a machine of its bulk.

The weak link comes in the form of the only engine choice. The Grandis is equipped with a 165bhp 2.4-litre petrol unit, and as with most big four-cylinder motors, this offers good low-down torque but feels coarse and unrefined at high revs. Hauling the MPV's bulk around means it has to work hard for a living, resulting in poor fuel consumption of 20mpg in town and a reluctance to accelerate eagerly.

With the automatic gearbox fitted to the Japanese-spec car driven here, the Grandis supposedly completes the 0-62mph sprint in 11.7 seconds. But in reality it feels sluggish, and the fact that the engine has to be pushed to the top of its rev range makes the driving experience tiring and unrefined.

The transmission is no great shakes, either. The four-speed box takes ages between auto shifts, and if used manually the ratios don't feel well spaced. We're sure the five-gear manual will be far better and add to the refinement, but we won't be able to drive it until UK cars arrive in July. A diesel will follow next year, and this will be the choice that makes the Mitsubishi more desirable. Its extra torque and fuel economy will no doubt make it more attractive to both fleet and family buyers.

Until then, the Grandis remains an interesting choice, but one that will appeal on its radical looks and cabin flexibility much more than its running costs.