Successful people carriers need to be stylish, spacious and cheap to run. Mitsubishi's Grandis scores well on two counts, yet its petrol engine means the car is costly at the pumps. 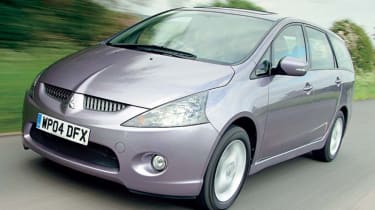 The addition of a diesel engine turns the Grandis into a viable full-sized MPV. The DI-D uses VW's oil-burning expertise to good effect, and while the handling is still inferior to rivals, keen pricing and frugal economy mean the car is sure to become a school run regular.

Successful people carriers need to be stylish, spacious and cheap to run. Mitsubishi's Grandis scores well on two counts, yet its petrol engine means the car is costly at the pumps.

All that looks set to change with the introduction of a diesel model - but does it make the Grandis grand? Thanks to a deal with Volkswagen, it is not just any old oil-burner under the short bonnet. The newcomer gets what is regarded as the best mid-range diesel on the market - the 2.0-litre TDI used in the latest-generation Golf.

In Mitsubishi guise, the powerplant is badged DI-D and produces 134bhp. Performance is strong and the slick six-speed manual gearbox allows the driver to make the most of the unit is torque. Use all 310Nm and 0-60mph takes only 10.8 seconds - that's just 0.8 seconds behind the petrol model. In fact, the oil-burner's mid-range punch means this car is quicker for everyday driving.

Refinement is less impressive and diesel clatter is audible, with the Grandis becoming really noisy under hard acceleration. Drive carefully and the engine will return 43mpg, while CO2 emissions of 176g/km make the Euro IV-compliant model a viable option for company car drivers. Both the steering and front suspension have been tuned to improve handling, although not noticeably. The real problem is the ride, which fails to smooth out rough road surfaces.

The entry-level oil-burning model costs £1,200 more than the equivalent petrol variant - but there is no doubt it is worth every penny extra. Most buyers will find that the Grandis fits the MPV brief better than ever before.