Here's the Mitsubishi that will spearhead the Japanese firm's assault on the large MPV market. This imposing seven-seater is the Grandis Warrior, a car that adds even greater visual drama to the already outlandish look of the Grandis. 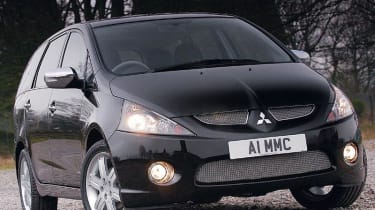 These days, it's not only sports cars that stand out from the crowd, and the Grandis Warrior is for families who want to get noticed. The big MPV cuts a dash with its chrome details and large alloys. Given the level of standard kit, the Mitsubishi is good value for money, too - but it really needs to add a diesel option to its armoury.

Here's the Mitsubishi that will spearhead the Japanese firm's assault on the large MPV market. This imposing seven-seater is the Grandis Warrior, a car that adds even greater visual drama to the already outlandish look of the Grandis.

Inspired by the success of the L200 Warrior pick-up, our test car boasted striking black paint, 18-inch alloys and aluminium trim on the grille, wing mirrors and door handles. Whether the add-ons enhance the seven-seater's appearance is a matter of opinion, but when it comes to standard equipment, no expense has been spared. Warrior buyers get a DVD player with an eight-inch screen, a six-disc CD changer and leather trim at no extra cost.

Elsewhere in the cabin, the seating layout is well designed, with plenty of room for front and rear passengers, and there are lots of storage cubbies to hold everything the modern family needs.

Mechanically, the Warrior is identical to other variants, featuring the same 2.4-litre petrol engine, fitted with either a five-speed manual gearbox or a four-speed auto. Our test car came with the self-shifter, which allows the Grandis to accelerate from 0-62mph in 11.7 seconds. However, the transmission makes unpredictable downshifts which highlight the four-cylinder engine's thrashy nature at high revs.

Otherwise, the Mitsubishi is safe and predictable out on the open road, absorbing bumps and potholes with ease and never feeling unstable. When the tarmac gets twisty, the Grandis retains its composure with well contained body roll. However, a lack of feel through the steering discourages you from pushing too hard.

Sitting at the top of the Grandis line-up, the Warrior auto is priced at £23,499. That might sound like a lot of money, but given the amount of standard equipment thrown in, it's difficult to find a full-size MPV which can match the Mitsubishi for value.

However, the biggest problem facing the Grandis is its limited range of powerplants. There is no diesel option, or even a more frugal petrol model, so the 2.4-litre unit, which returns 28.2mpg, is the only motor available. If buyers decide that they can afford the fuel bills, you could soon see an army of Grandis Warriors lining up in a supermarket car park near you.