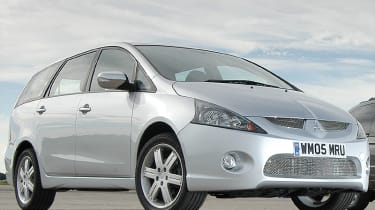 Driving: The Grandis is a seven-seat people carrier that feels very car-like. It turns in sharply, has plenty of grip, good high-speed stability and very impressive body control. The ride quality is very good too, absorbing rough surfaces very well, with only a slight amount of steering kickback letting things down. It's generally very pleasant to drive, with a slick dash-mounted gearshift too. The petrol engine is smooth and sporty, but the diesel engine is downright noisy, with a loud diesel rattle at low speeds. The light 1,710kg kerbweight and relatively short gearing mean in-gear performance is strong, but be warned that the clutch and gearlever are relatively stiff to operate.

Marketplace: Need an MPV, but don't want to sacrifice style? Then look no further than the Mitsubishi Grandis. Sleek and sporting, it blows rivals off the road in terms of design. There are two engine variants, a 2.4-litre petrol and VW-sourced 2.0-litre turbodiesel. The latter accounts for 85 per cent of sales, proving how important diesel power is in this sector. There is a four-model range, with the very distinctive Warrior model sitting at the top. All are keenly priced, to compete with rivals including the Ford Galaxy, Kia Sedona, Seat Alhambra and Citroen C8.

Owning: As with the exterior, the interior of the Grandis has a modern feel. The curved dash places controls within easy reach, and the dials light up in a cool blue colour at night. The material quality is also pretty good; the Mitsubishi is ahead of many rivals in this respect. However, the low roofline makes life awkward inside. Open up one of the long back doors and headroom is tight; there's more kneeroom, but this is still claustrophobic by class standards. It also has a baffling seat layout. We love the 'Hide & Seat' third row of chairs, which flips out of the floor easily. Yet the middle row merely splits 60:40 like a conventional family car's, and neither can be folded flat nor removed. The seats slide and tilt, yet this arrangement means long loads can't be carried, and so flexibility is limited. Treat the Grandis instead as an estate with occasional chairs in the boot. Meanwhile, 9,000-mile services intervals are unimpressive (and rates are expensive), and petrol economy is poor. On-paper figures for the diesel are better, but in our hands it returned only 32.2mpg. Retained values are excellent though, and the well-equipped Grandis is fantastic value for money. 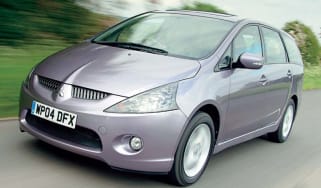 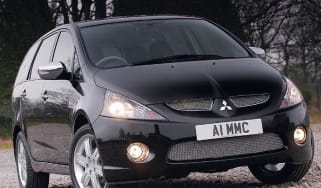 Here's the Mitsubishi that will spearhead the Japanese firm's assault on the large MPV market. This imposing seven-seater is the Grandis Warrior, a ca…
Mitsubishi Grandis 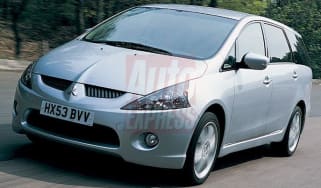 For car buyers, choosing an MPV is the equivalent of preferring an evening in front of the telly to a night out clubbing. It says that your days of yo…
Skip to HeaderSkip to Content