The Mitsubishi i-MiEV is one of the first all electric cars, but it comes with plenty of flaws 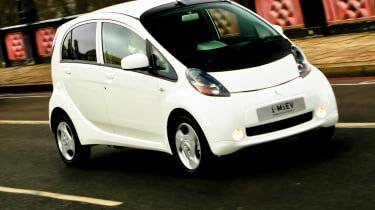 The Mitsubishi i-MiEV is one of the few all-electric models on sale today and it's far smaller than the Nissan Leaf. While the Leaf is aimed at models like the Golf and Focus, the i-MiEV is aimed at the smaller supermini market where owners will be spending the majority of their time driving around narrow city streets. And the i-MiEV is very good at that: it feels quick from 0-30mph, it's very relaxing because of the silent electric motor and it'll be cheap to run too. Buyers should be careful though because the limited range can quickly make you think twice about making longer journeys. It's also quite expensive to buy in the first place thanks to the costly battery technology.

Driving around town you'll notice that the i-MiEV feels very quick indeed, and that's down to the fact that it boasts 180Nm of torque from 0rpm. As soon as you floor the throttle you'll take off at speeds that feel unusual for a motor that boasts only 66bhp. As the speeds rise, acceleration slows and the final 0-62mph time is quoted as 13 seconds. There's not much fun to be had in the corners, with a fair amount of body roll and a lack of grip from the skinny tyres preventing you from pushing too hard.

Mitsubishi claims that the i-MiEV has a range of about 93 miles but in everyday driving you'll experience more like 60 miles. A full overnight charge will cost around £2, which looks very good compared with the amount of range you'd get from £2 worth of petrol. There are other benefits to having an electric car though, including exemption from road tax and the ability to travel in central London for free, rather than paying the £10 a day congestion charge.

The Mitsubishi i-MiEV could easily pass by without anyone realising it's an electric car. It does look a little bit strange, with its jelly-bean shape and small wheels but the only real giveaway as to what sits under the bonnet is the lack of an exhaust pipe. The interior is a bit short on flare too, with quite a few dull coloured plastics making up the dashboard and centre console.

With the high roof line, there's quite a generous amount of room inside the i-MiEV's cabin for front and rear passengers. Unlike most vehicles the rear bench can only seat two passengers so if you'll regularly be carrying five people then it's best to look elsewhere. Boot space isn't spectacular but the 227-litre load area on offer should be enough for most people's needs. The i-MiEV won't be for everyone though as you can't charge it unless you can park near a plug socket.

When Mitsubishi crash tested the i-MiEV it managed to score four stars in the EuroNCAP test, falling short of the maximum five stars. It comes as standard with six airbags, stability control and ABS. The i-MiEV has been on the roads for a couple of years now and no problems have been reported with the electric drivetrain. There aren't too many examples driving around though, so it's difficult to say for certain.