Best of the rest at the 2015 Detroit Motor Show

The Detroit show is host to some amazing new cars, but here are some of the weird and wonderful ones you might have missed 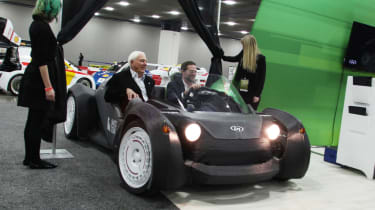 Detroit 2015 saw more than its fair share of global debuts, with Ford launching a successor to the legendary GT, Honda unveiling a hybrid-powered NSX and Audi bringing its all-new Q7 SUV. However, alongside all the shiny new metal, there were a few crazy cars we won’t get in the UK. Here we're rounding up these unusual machines from the big, bold and beautiful, to the downright ridiculous.

Click through our gallery for the craziest cars in Detroit 2015.

The LM Strati is surely one of the most unusual cars at the Detroit Motor Show. Its makers say that the Strati is the world's first 3D-printed car. Everything on the car that could be integrated into a single piece has been printed off using the latest tech - including the chassis, bodywork and interior. The powertrain isn't printed off, however - it comes from a Renault Twizy. It's quite fitting that such an odd car would be the basis of a unique new model like the Strati. 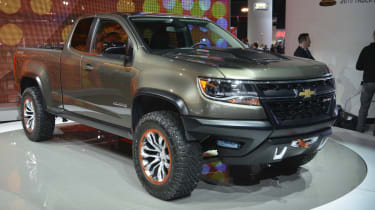 It's not just passenger cars that spawn concept cars at the world's top motor shows - pick-up trucks do too, like the Chevy Colorado ZR2 Concept here. It's supposedly aimed at those looking to go off-road with their pick-up, and it features electronic locking differentials front and rear, 35-inch-tall off-road tyres and special off-loading racing shocks. Oddly enough for a big American truck, it's got a diesel engine - although it keeps the US's reputation for displacement intact with its 2.8-litre capacity. 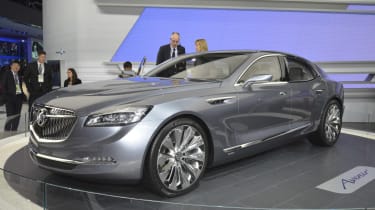 Buick is part of General Motors, so while this new concept car is strictly aimed at the US market we could see some design influences on future Vauxhall concepts and perhaps some future production cars. It's actually not the most radical of concepts, with its drab paint colour and plain styling - but the chromed 21-inch wheels and huge grille do help it to stand out - from a UK perspective, at least. It features an on-board Wi-Fi hotspot (using 4G) and a large 12-inch touch screen. 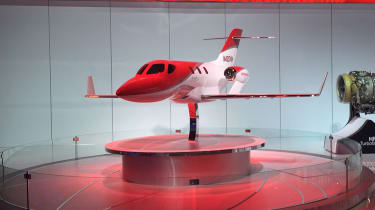 Honda decided that despite this being the North American International Auto Show, it would display a miniature version of its new aeroplane. The Honda Jet will take to the skies later this year, aimed at wealthy corporate professionals. Being a model we weren’t able to take a look inside, but expect unrivalled levels of luxury when the multi-million pound aircraft goes on sale soon. 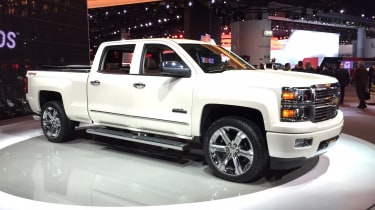 While the Silverado might not be particularly crazy by American standards, there’s no denying it would stand out on UK roads due to its sheer bulk. The huge pick-up truck gets a choice of V6 and V8 petrol engines, all with sub-20mpg fuel economy. This range-topping High County model also boasts 20-inch wheels, 12-way electrically adjustable seats and a Bose stereo. Front and rear parking sensors are also included – of course! 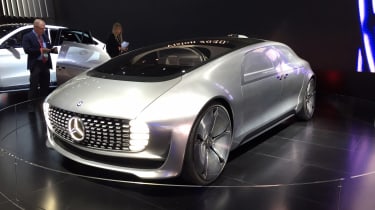 Mercedes gave us a glimpse of the future with its weird and wonderful F 015 concept car – first revealed at the 2015 CES show in Las Vegas. It’s over five metres long and two metres wide, with a huge 3.6m wheelbase – ensuring plenty of space inside for passengers. So much, in fact, the seats can rotate 180 degrees allowing occupants to turn and face one another. It’s powered by hydrogen and is part of what Mercedes calls its “City of the Future 2030+” scenario. 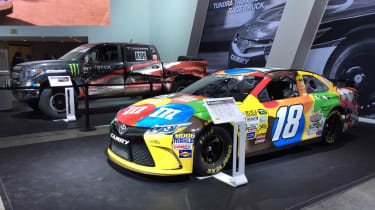 Nestled in the far corner of Toyota’s Detroit show stand were a pair of exciting race cars. The Joe Gibbs Racing NASCAR Camry, driven by Kyle Busch was on show with its bold M&M livery, while next to it sat a battered a bruised Tundra TRD Desert Race Truck. The latter has been tuned and tweaked for the most brutal terrain, featuring uprated Billstein shocks, 17-inch forged wheels and a tough tube roll cage. It looked like it’d taken a few knocks already, with huge chunks ripped from the driver and rear passenger doors. 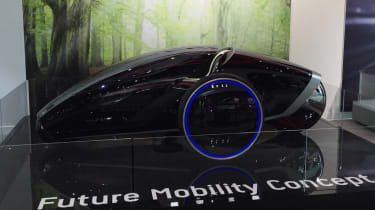 The Toyota FV2 ‘Future Mobility Concept’ was on show in Detroit, too. It’s not the first time we’ve seen the personal transportation pod, but the futuristic concept still stood out on the Toyota stand. The car is controlled by the driver shifting their position around the cabin, and uses facial recognition to project key info onto the windscreen.