Sharper than a box of knives and slicker than a gallon of two-stroke oil. The RS 125 is small, but reassuringly expensive 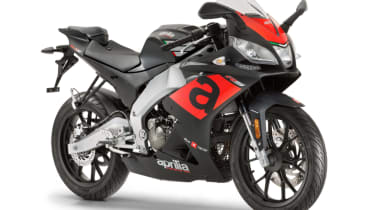 If you’re looking to hone your novice riding skills using the finest new machinery at your disposal, then look no further than Aprilia’s learner-legal RS 125. It’s probably the best all-round 125cc bike on the market. The price is high, but you’d expect it to be with such a good pedigree, and that sexy styling will make you the envy of all your mates.

The original two-stroke RS 125 sold over 100,000 units worldwide, won numerous race championships at club and world level and helped a generation of adrenaline junkies to get high. The rip-snorting, high-revving and peaky (but often fragile) performance from its two-stroke engine made it the stuff of legend on road or track.

With that unit replaced by a much more sedate, but reliable, four-stroke engine, the RS4 125 had the looks, but lost the magical performance and characteristic soundtrack. Aprilia dropped the ‘4’ from its name for 2017 and redesigned the bike to celebrate its 25th anniversary, but don’t expect to regain the lost power band and excitement of those smoky two-stroke days. You do get ABS, though, along with phone storage and the option of a quick-shifter; and, it’ll get you home, so you won’t need your breakdown service on speed dial. 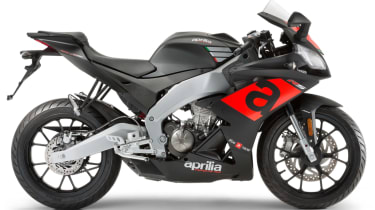 Even though the original two-stroke engine has been replaced by a liquid-cooled four-stroke unit, it’s not all bad news. Frequent rebuilds, expensive bottles of messy oil and the compulsive urge to make the bike even more fragile by buying tuning goodies and expansion pipes are a thing of the past.

The four-stroke engine may only make the permitted 15bhp (rather than the derestricted 35bhp of the two-stroke) but it’s still great fun and will take you to over 80mph - with your head down. Add the optional £100 quick-shifter and there’s no need to use the clutch between second and sixth gears, meaning you can keep the power on all the time, which is very important when making the most of a 125’s diminutive power. The brakes are fantastic and the Bosch ABS means you won’t be locking the wheels if you get a bit too ham-fisted.

The RS 125 will certainly keep you entertained; in the right environment, you can have more fun on a decent 125 like this than you can on a superbike. Twisty country lanes, multiple laps of local roundabouts and having fun with your mates are what it’s all about. 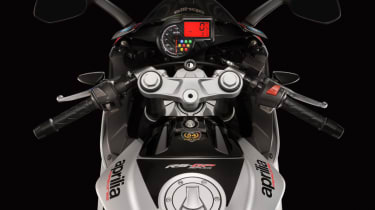 The chassis is sublime, the tyres grippy and the handling stupendous, so you can learn the art of controlling a motorcycle without going too fast on an RS 125. You can see 80mph on the clock, but as with all small-capacity four-stroke machines, it’s not overly exciting getting there.

The RS 125’s engine is well proven and, compared to the old smokers, there’s nothing to worry about. Keep it serviced, check the oil regularly and look after the chain, and you’ll enjoy owning it. It’s an expensive 125 to buy, so look after it and it’ll be worth more when you trade it in for your RSV4 after passing your test.

Built in Italy, the RS 125 oozes quality, and every last detail looks like it just arrived from the racetrack, especially in MotoGP trim. Fellow riders will mistake it for the RSV4, whether it’s parked up or on the road, and it looks stunning. Even though it’s a sportsbike, it isn’t overly uncomfortable to ride and is actually fairly roomy. 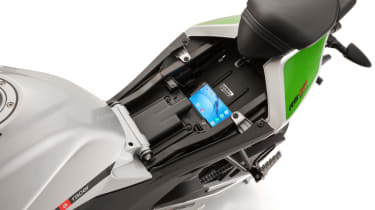 If you do want something slightly less aggressive-looking and with a little more comfort, the Tuono might be a better bet. Both models have a storage compartment beneath the seat, and it’s big enough for a 6.0-inch tablet or your phone, and you can add an optional charge point (although it’s a shame it’s not fitted as standard). Who says a sportsbike can’t be practical?