The naked four-cylinder sports bike based on Yamaha’s YZF-R1 is a fast, fine-handling machine with a great character and a keen price 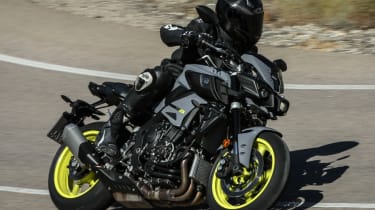 You’ve only got to take one glance at the MT-10, with its aggressive styling and YZF-R1-derived engine and frame, to know that it was created to generate plenty of excitement. And, you only have to sample its performance briefly to confirm that bolting a mildly detuned 998cc engine from Yamaha’s super-sports flagship into a light and compact chassis has resulted in a superb hyper-naked bike. The MT-10 is a fast, fine-handling and reasonably versatile machine with an addictive character. A competitive price makes it excellent value for riders who appreciate its distinctive look.

With its flexible and rev-happy 158bhp four-cylinder engine matched to an impressively well-equipped chassis, the MT-10 is one of the stars of the MT family of naked streetbikes, whose success has transformed Yamaha’s fortunes in the last few years. After the MT-09 triple had begun the firm’s revival in 2013, it was followed by the MT-07 and MT-03 parallel twins and single-cylinder MT-125, plus several spin-off models, all offering lively performance, light weight and excellent value for money.

Since its launch, it has been joined in the range by two variants. The upmarket MT-10 SP, which costs £13,699, features a full-colour instrument panel and Öhlins semi-active suspension. Meanwhile, the £11,849 MT-10 Tourer Edition includes a high screen, hand-guards, comfort seat, sat-nav fitment and panniers from the base model’s accessory list. 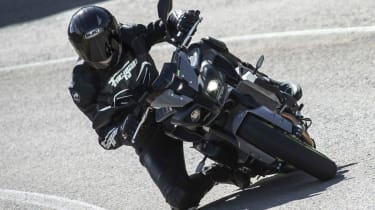 Yamaha created the MT-10 engine by detuning the R1’s 197bhp, crossplane-crankshaft engine with new camshafts, reshaped combustion chambers, a lower compression ratio, smaller intake valves and a heavier crankshaft. Fuel injection and exhaust mods also contribute to an engine that puts more emphasis on mid-range output, but still kicks out an impressive maximum of 158bhp, matching the S1000R and up on its Japanese rivals. Electronic features include three riding modes, three-way adjustable traction control, cruise control, a slipper clutch and a quick-shifter for the six-speed gearbox.

The MT’s aluminium Deltabox main frame, borrowed from the R1, is combined with a steel, rather than aluminium, rear subframe, to allow the extra weight of panniers. The aluminium swing-arm is also almost identical to the R1’s, as is the steering geometry. The naked model also got its multi-adjustable Kayaba suspension parts from the R1, although the spring and damping rates are slightly softer. Braking is by a high-quality blend of 320mm front discs and four-piston radial callipers.

The MT-10 is a superbly exciting bike: responsive, fast, and bursting with crossplane-crank character. It pulls cleanly from low revs, and by 6000rpm is accelerating with enough force to lift its front wheel effortlessly. It then kicks again as it reaches the strongest sector of a torque curve that peaks at 9,000rpm. Inevitably, the MT can’t match the faired R1’s high-speed ability, but it has a top speed of over 160mph and is more than fast enough for the street. Its low, plastic nose section is more an instrument surround than a genuine flyscreen, but it usefully deflects some wind, without creating too much turbulence. 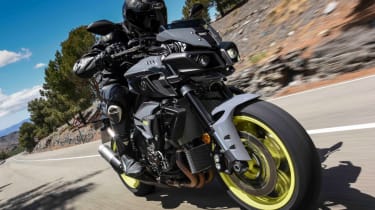 If the Yamaha’s engine performance is sporty and very well controlled, the same can be said of its chassis. On twisty roads, the bike feels light, well balanced and manoeuvrable, helped by taut and well-damped suspension. It even remains stable under hard acceleration out of turns, with the help of a non-adjustable steering damper. Braking is also very impressive, and backed up by excellent Bosch ABS, although the MT requires slightly more lever pressure than the most powerful systems.

Like any hyper-naked bike, the Yamaha is not cheap to run: it’s basically an open-class sports bike without a fairing, and if ridden hard, will drink petrol at 35mpg and chew through brake pads and fat, sticky tyres at a fearsome rate. For many riders, though, that’s a fair price to pay for its outstanding performance and sophistication. If used more gently, the MT can deliver over 40mpg and make its consumable parts last far longer. 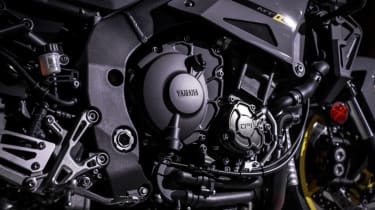 It’s also generally reliable. Yamaha’s 998cc, crossplane-crankshaft engine has earned a good reputation since debuting in the comprehensively updated R1 in 2015. Maintenance intervals are fairly generous, too, with a basic service recommended annually or at 6,000 miles, a plug and filter change at 12,000, and valve clearance check every 24,000. Warranty is the industry standard of two years and unlimited mileage that comes with all Yamaha bikes.

Yamaha has given the MT-10 a strong dose of its futuristic Dark Side of Japan theme, with layered body panels and a pair of tiny LED headlights. That edgy design is not to every rider’s taste, but the build quality seems good, despite a few flimsy bits of plastic, such as the small wings around the tailpiece. Similarly, the attention to detail is slightly mixed: the front fork adjusters are conveniently located on the top of each leg, but the shock-adjustment screws are difficult to get to. 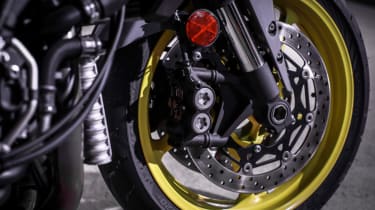 There’s a large digital speedo on the LED dashboard, with a rev-counter bar running above. The 17-litre fuel tank is typically good for a range of about 140 miles, and at 825mm, the MT’s seat is 30mm lower than the R1’s. With the help of its light weight and the raised, one-piece handlebar, which gives a roomy and slightly leant-forward riding position, that makes the bike manageable. The rider’s part of the seat is wide and quite comfortable, but the pillion section is thin and there’s nothing solid to hold. If you want to make the bike more practical, you can add heated grips and the accessories that come with the Tourer Edition, while among the sportier extras are rearset footrests and an Akrapovic muffler.