The Lexmoto Venom looks the part, performs well and includes an on-board stereo system as standard. Perfect for impressing your mates 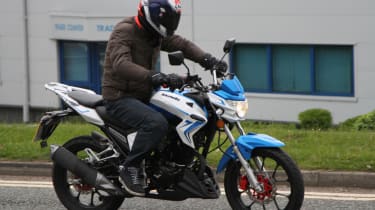 For little more than the price of a half-decent mountain bike, you’re getting a Euro 4-spec, fuel-injected bike that looks the part and comes from a reputable source. The Venom rides well, goes well and isn’t too expensive, either. One thing to remember when buying a cheaper-end bike is that it’s built to a price, so the fasteners, finishes and components aren’t likely to be as good as they would be on a more expensive machine from a mainstream manufacturer. On the other hand, you’ll be aware that not buying a future classic and are unlikely to be coveting a Lexmoto in 30 years’ time during your midlife crisis. What you’re buying is day-to-day transport.

Lexmoto is the UK’s leading supplier of branded Chinese motorcycles and scooters. It blitzed the competition in 2016, selling thousands more 125cc machines than anybody else. It’s a well established company; and, unlike many other cheaper end brands, Lexmoto has kept up with the latest developments. The 2017 fuel-injected Venom EFI meets Euro 4 regulations and costs £1799.99.

The Venom performs surprisingly well. Although it has a simple, air-cooled, two-valve engine, it accelerates more quickly than many 125s; and, with a slick five-speed gearbox, the four-stroke engine will soon see the bike topping 60mph. It runs out of steam a bit after that, but you should see a touch over 65mph on the digital clock.

The old carb-fed engine was a little lumpy first thing in the morning, but the fuel injection on the EFI model makes things much smoother and the engine incorporates a balance shaft to eliminate most of the nasty vibration. The Venom EFI also comes with front and rear disc brakes, and they’re powerful enough to stop the bike without fuss. On top of that, thanks to meeting Euro 4 regulations, the bike also benefits from a Combined Braking System for even distribution of the braking force. 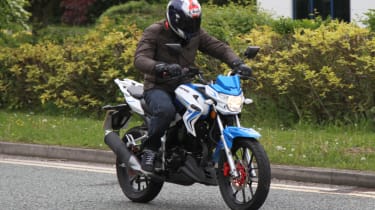 As long as you’re not expecting class-leading levels of comfort, you’ll be pleasantly surprised. The Venom rides well, and the suspension does a good job, although the profile of the CST tyres takes a little getting used to before you can put your trust in them. The bike pulls away well from a standing start and soon gets up to 60mph. Although the power tails off a bit after that, the bike feels quick enough to keep up with the flow of traffic on quicker A-roads.

Like most 125cc bikes, the Venom is cheap enough to run, you can expect to achieve around 100mpg, and the huge 14-litre tank means you won’t have to fill up too often. Insurance won’t cost an arm and a leg, either, and, it’s a cheap bike to buy, run and look after. Parts aren’t expensive, either: you can buy a new mirror for £14.50 and a rear luggage carrier for £27.59, for example. 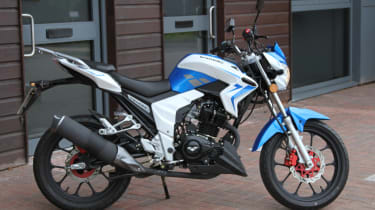 Lexmoto bikes, like any from cheaper-end (or mainstream) brand, can have their issues, but they’re certainly not known for being especially unreliable or troublesome; and, they’re backed by a two-year manufacturer’s warranty. On the other hand, service intervals are quite short: the first service is at 500km, with the next ones following at 1,500km, 4,000km and 7,000km. Expect to pay around £70-80 for an interim service.

If you’re buying a cheap bike, some of the key things to look out for are a good importer, with an established dealer network; and, make sure the bike comes with a warranty that is worth more than the paper its written on. Ask the dealer what it includes.

Although the Venom comes with a digital dash and an MP3 player built into the tank – just stick a memory card or USB stick in and listen to tunes from the speakers built into the panels – it doesn’t look quite as up to date as it could. Certain aspects look a bit ‘1980s’ and the plastics aren’t quite as substantial as they could be. 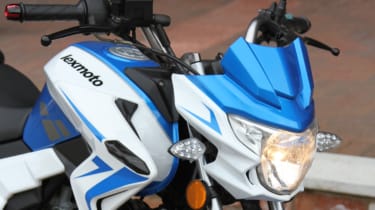 Having said that, build quality is as you’d expect on a fairly cheap bike and the latest EFI colours have modernised things a fair bit. You can’t expect the build quality or components to be up to the same standards as on something like an Aprilia RS4, but you have to remember that the Venom also costs a whopping £3,000 less than an RS4. Even so, the Lexmoto does exactly what it needs to do and includes the odd gimmick.