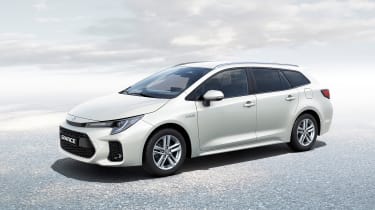 This is the new Suzuki Swace estate. It joins the recently unveiled Across SUV in the firm’s line-up, and when it goes on sale in the UK later this year, it’ll rival the new Skoda Octavia and Volkswagen Golf estates.

The Swace is the second vehicle born from Suzuki’s recently announced partnership with Toyota. It’s based on the Toyota Corolla Touring Sports, but features a subtly restyled radiator grille, front and rear bumpers, new LED headlamps and a tweaked pair of tail lights. Buyers also have their choice of seven paint finishes, including Oxide Bronze Metallic and Dark Blue Mica.

With the exception of some new leather upholstery, the Swace’s interior is transferred wholesale from the Corolla. It shares the same multifunction steering wheel, digital gauge cluster and eight-inch infotainment system, which also offers support for both Apple CarPlay and Android Auto.

Elsewhere in the cabin, buyers also get air conditioning, a couple of cupholders, an ambient lighting system and a 12V accessory socket in the boot, while a heated steering wheel, heated seats and a wireless smartphone charging pad can all be added as optional extras.

The Swace’s hybrid powertrain is another direct transfer from the Corolla. It comprises a naturally aspirated 1.8-litre four-cylinder petrol unit and a 71bhp electric motor, which offers a combined output of 120bhp. The system is mated to a CVT gearbox, providing a claimed 0–62mph time of 11.1 seconds and CO2 emissions as low as 99g/km. 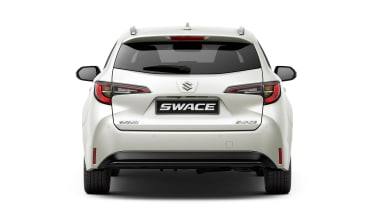 As in the Toyota, the Swace features three drivetrain modes – Normal, Eco and Sport – along with an EV function, which forces the powertrain to run in electric-only mode, providing a couple of miles-worth of emissions free driving.

Depending on the trim-level, buyers will also get an arsenal of safety technology, including lane-keeping assist, dynamic radar guided cruise control, a blind-spot monitoring system, road sign assist and rear cross-traffic alert.

Final UK specs and prices for the Suzuki Swace are yet to be confirmed but, given its similarity to the Toyota Corolla Touring Sports, we expect its price-bracket will be broadly similar. As such, the base-model should start from around £25,500, while the flagship model will likely carry a £27,500 price-tag.

Check out the best family cars to buy now...