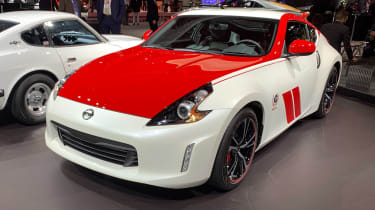 Nissan has announced pricing information for the 370Z 50th Anniversary Edition. Priced at £38,995, the model pays homage to the firm’s classic 1970 Datsun BRE 240Z racer. Just 22 examples will make it to the UK.

It was first unveiled at the 2019 New York Motor Show, forming part of Nissan’s Golden anniversary celebration for its “Z” and “GTR” nameplates. It was joined by a showcase of both badges’ greatest hits, which included the original Datsun 240Z and the legendary Calsonic R32 racer.

On the outside, the Nissan 370Z 50th Anniversary Edition mimics the livery used by the BRE 240Z racer. It’s available in one of two colour schemes, with buyers given the choice of a white base coat with red highlights or a silver base coat with black highlights. Other additions include a set of unique 19-inch RAYS alloy wheels and special “50th Anniversary” badging. 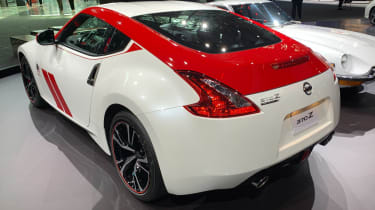 The engine feeds its power through a six-speed manual gearbox to the rear wheels, allowing a 0–62mph sprint of 5.3 seconds and a top speed of 155mph.

What are your thoughts on the new Nissan 370Z 50th Anniversary Edition? Let us know in the comments section below…

The Z Proto concept hints at the next Z car, which is likely to be named the Nissan 400Z, but the production model won’t be coming to Europe