Nissan has revealed a limited edition version of its Leaf electric car called the Leaf Black. It’s a style driven addition to the Leaf range, and comes with several exclusive design tweaks.

As the name suggests, the car’s all-black colour scheme is what sets it apart from the rest of Leaf range.  The paint finish is joined by black 16" five spoke alloy wheels, and black detailing on the mirrors and rear roof spoiler.

The Black edition gets some technology additions too. The latest version of NissanConnect is standard, allowing you to control some of the car’s settings and check battery charge through your smartphone while it’s parked.

The Around View Monitor is also a standard piece of kit. This projects a virtual birds-eye view of the car on the infotainment screen, making it easier to park.

The Black Edition is based on Acenta trim level versions of the Leaf, so cruise control, automatic headlamps and windscreen wipers, plus a six way speaker system should also be included as standard kit. 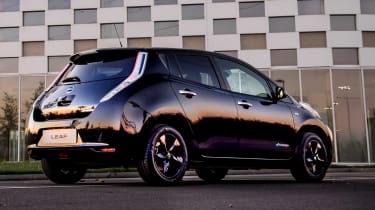 It’s a time limited special edition, and will go on sale between March and August 2017. The first 1,000 customers will get an extra perk too – Nissan will throw in a free Wi-Fi hotspot for smartphones and tablets.

Alongside news of the new Leaf is a social media based car-sharing platform, using the next version of the Micra.

The scheme is called Intelligent Get & Go Micra, and it will use an algorithm factoring in social media profiles and travel patterns to place drivers together in convenient pools.

Unlike the sharing schemes proposed by other manufacturers, the cars won’t be leased – the full purchase cost of the car will be split across the group, so it will be completely community owned. Monthly invoices for insurance, fuel, and servicing will be divided according to usage.

The scheme will go live later this year but is limited to Paris for now. The new Mirca isn't due until the start of next year, and Nissan says the shared cars won’t actually hit the road until March 2017.

Will car sharing schemes take off in the future? Let us know your thoughts in the comments...