Nissan e-NV200 Combi is based on an electric van, and offers huge amounts of space with an electric motor 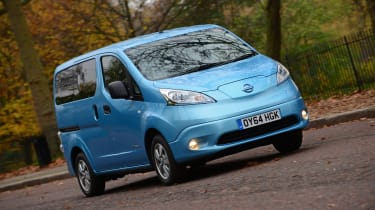 Unless you absolutely need the acres of space on offer in the e-NV200, we’d recommend going for a more modest EV such as Nissan’s very own Leaf, or the brilliant BMW i3. They’ll manage a similar range, costs less after the Government grant, yet feel much more nimble around town thanks to their lighter bodies and more car-like handling.

The Nissan e-NV200 really is in a niche of its own. No other electric car offers the same interior space and outright practicality, not to mention the questionable looks and slab-sided styling.

There’s no denying the NV200’s generous loadspace is heads and shoulders above other all other EVs on the market. Its van-based roots ensure it boasts a massive 2,270 litres of bootspace with the rear seats in place – or 3,100 litres if you remove them entirely. 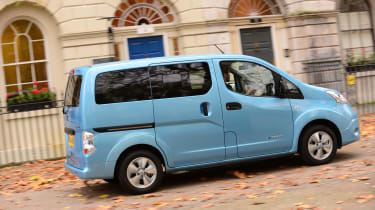 The area is easy to fill too, thanks to a low load lip and a wide opening, but if passengers are your main concern, you’ll be disappointed to discover that the e-NV only offers seating for five. What’s more, the archaic sliding windows don’t offer much relief for those in the rear seats, and could prove troublesome on hot summer days. The tinted privacy glass should help matters here, which is standard on Tekna specification.

On the move, the Nissan fails to excite. But that hardly matters in a car or van like this, and few buyers concerned with handling or straight-line speed will even give it a second look. What’s off-putting though is that the usual urgency of an electric car is diluted by the NV’s bulk, and the upright driving position confirms this as a vehicle providing function over fun. 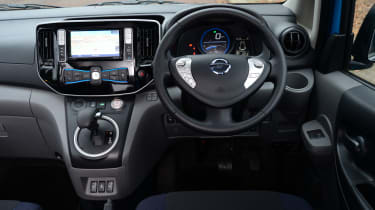 Standard equipment is good, and so it should be for nearly £26,500. The e-NV200 Combi is available from as little as £17,855 (also after the grant is deducted) for the basic Acenta – but then there’s battery rental on top of that, which costs from £61 per month. The price quoted includes buying the batteries outright, as well as kit like rain sensing wipers, Bluetooth connectivity, cruise control and Nissan’s brilliant Around View Monitor. Climate control, keyless go and 15-inch alloy wheels are also included.

The dash is covered in a confusing array of buttons, but anyone who’s driven a Qashqai or new Nissan Pulsar shouldn’t have too much difficulty navigating the central infotainment screen. As in all electric cars, the heated seats and steering wheel offer a more economical way of keeping warm – with the air-conditioning system slicing considerable range from the e-NV’s lithium ion battery. 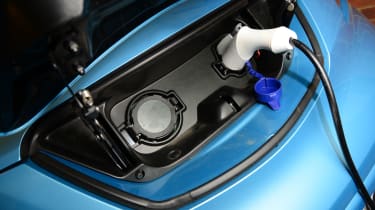 Speaking of which, the e-NV’s electric range of 106 miles is actually closer to 75 in reality. The ‘eco’ button does a good job of limiting power, and around town should offer just about enough shove for nipping in and around slower moving traffic.

All things considered, the fact that the e-NV200 isn’t available with seven seats limits its real world appeal. Nissan’s very own Leaf offers room for five and a reasonable 370 litres of bootspace, which should be more than enough for your average family. The nail in the NV’s coffin is that the Leaf costs nearly £10,000 less, which like the e-NV, qualifies for the government’s £5,000 plug-in grant.