The Nissan e-NV200 is the largest electric van on sale, and it offers big benefits to drivers in urban areas 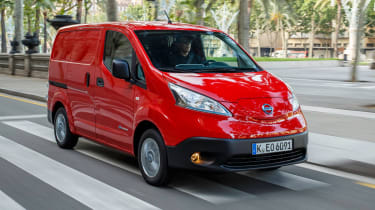 The Nissan e-NV200 is the electric van equivalent of the Nissan Leaf. It uses the electric running gear from the Leaf, while the chassis and body are sourced from the NV200 van. It's a compact van, so the addition of the EV running gear means it's perfect to use on congested city streets while producing zero exhaust pipe emissions.

The e-NV200's only rival at the moment is the Renault Kangoo ZE, while an update in 2017 gave the e-NV200 a new 40kWh battery to give the van a claimed range of 174 miles. This helps to allay fears about expected range, although the van is still at its best in town.

With direct drive and the instant torque of the electric motor, the e-NV200 is easier to drive than the diesel NV200, plus you get the benefit of cheap running costs thanks to more affordable electric charging when compared to diesel prices. In addition, the e-NV200 is available as a five-seater Combi passenger car.

The electric NV200 is 160mm longer than the diesel version, thanks largely to an extended front end, but that has improved pedestrian safety. That's useful in a van with such a quiet powertrain, although there is also a sound generator on board that makes noise at speeds below 30mph. The new nose gets the charging point under the blue chrome badge, new LED strips in the lights and 15-inch alloy wheels.

An all-electric London taxi based on the e-NV200, with a tighter turning circle and other modifications to meet London taxi requirements was developed, but it has yet to make production. However, the standard e-NV200 has been put into service across Europe as a taxi.

The main benefit of buying an electric van will be the running costs - the e-NV200 is likely to save owners a lot of money on short journeys. Nissan claims it could cost as little as two pence per mile to run.

As with any electric vehicle, though, the range could deter potential buyers of the van. While the 106-mile range is likely to be plenty for drivers who spend most of the day in a local area, longer cross-country trips will be a concern.

It takes 8 hours to charge, or 4 hours with a higher-capacity charge point. A rapid charger is also available - this can take the batteries to 80 per cent in just 30 minutes, and is perfect for loading and unloading at a stop with a charge point.

A big plus for the e-NV200 is that it's exempt from the London Congestion Charge, and benefits from free VED. Many charging points across the country are free to use, as well.

For a compact van, the e-NV200 offers a lot of load space: like the diesel NV200 it has 4.2 cubic metres of volume in the rear, with a load bay of 2.04 metres. With the optional folding passenger seat that extends to 2.8 metres, and the 1.22-metre width at its narrowest point means the load bay can swallow two Europallets.

The e-NV200 beats its traditionally-powered sister when it comes to payload, at 770kg, and despite the batteries being stored in the floor the loading height is just 524mm. Access is good, with a sliding door on each side, plus there's the option of double doors at the rear or a lifting tailgate. 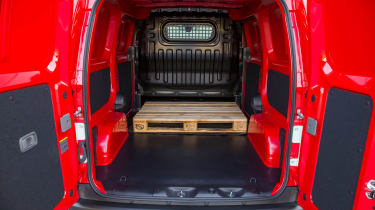 It's the only electric van, so the e-NV200 corners the market on space in that regard, but rivals for the normal NV200 like the Fiat Doblo Cargo and Ford Transit Connect are available with more interior space and higher payload capacities if you need it.

All NV200 vans feature six load lashing points in the floor, and the bulkhead is available in several forms, including tubular, full steel and windowed. The Combi five-seater has folding rear seats, but they can't be removed and do reduce the load bay space by quite a bit.

With the extra weight of the batteries on board, Nissan has had to strengthen the panels of the e-NV200 compared to the diesel van, and the new EV face means pedestrian safety has been improved - although they may not hear you coming, so drivers will have to take extra care on streets with a lot of foot traffic.

Hill start assist, a rear-view camera and a beep when reversing are all standard on the e-NV200, so it's easy to manoeuvre around town and avoid bumps and scrapes.

There's not much data on the long-term reliability of electric cars, but the fact that they have less moving parts means servicing costs are low. Plus, because the technology is straight out of the updated Nissan Leaf, it benefits from the experience the brand has gained from the time the small family car has been on the road.

The e-NV200 was tested extensively ahead of its launch with large companies with van fleets, including British Gas - so any problems that arise from a working life should already have been highlighted.

The electric motor produces 254Nm of torque from the moment you put your foot down, so the van feels nippy and nimble in town. City driving is where the e-NV200 excels, with the instant response of the electric motor and the single-gear ratio meaning it couldn't be simpler to drive in a city-centre traffic jam.

On faster roads the e-NV200 can feel out of its depth, though, with an unpleasant bouncy ride when there is no load in the back. There's quite a bit of body roll in corners, but it's more fun to drive than the diesel NV200 thanks to the torquey electric motor and light steering. 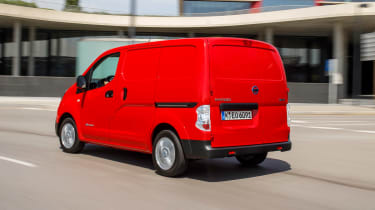 The top speed of the van is 76mph, but this is reduced to 60mph when the batteries are running low to improve the range. The electric motor does fall off, too - it's pretty lifeless at motorway speeds.

The e-NV200 is better to drive than the normal NV200 thanks to the new power unit, but the Ford Transit Connect still beats it on overall driving enjoyment.

The interior of the e-NV200 is mostly the same as in the NV200, but it does get a few key features from the Nissan Leaf that really improve things.

It doesn't have a high-quality feel, with plenty of scratchy plastics, but the gloss black centre section from the Leaf, which integrates the sat-nav, air-conditioning and radio, is a welcome addition. The steering wheel and instrument display are also taken from the Leaf. Equipment includes Bluetooth, USB, a rear-view camera, climate control, heated seats and a heated steering wheel.

The gear selector is fairly compact and opens up room in the cabin, but there could be more space around the driver given the size of the cab. Headroom is good, though.

Some models are available with a system called Carwings, which lets the driver start the air-con before they get in, using a smartphone app. The app also allows you to start and stop charging, and monitor battery levels.

(Widths are body width without mirrors. With mirrors: 2,011mm)

(Widths are maximum. Width between wheel arches is 1,220mm) 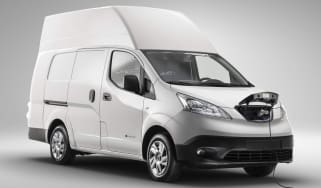