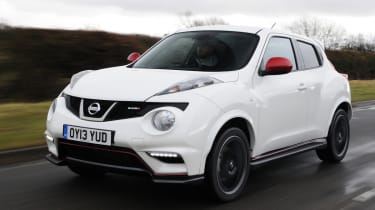 The Nismo is the best Juke we’ve driven so far – it may not be a match for hot hatches dynamically, but it’s bursting with character, is usable every day and offers something different. It’s also loaded with kit, so its sub-£20,000 price looks a good deal. As the first in a range of Nismo models – to include the 370Z, GT-R and even the Leaf – it bodes well.

A lot has changed since we drove the Nissan Juke Nismo in Spain in January. Not only has the car arrived in the UK, but three new performance superminis have also burst on to the scene: the Ford Fiesta ST, Renaultsport Clio and Peugeot 208 GTi. So if the 197bhp Juke is to make an impression here, it has some stiff competition to beat.

The high-riding Nissan isn’t exactly a direct rival for these three conventional models, but as it has a similar power output and footprint on the road, potential buyers are sure to consider it.

Nissan tuning arm Nismo has made sure the car grabs your attention. Our test model looked fantastic with its Storm White paint (it’s also available in black or silver), red wing mirrors and thin red pinstripes running around the bottom of the body.

Nissan has ditched the regular car’s circular vents in favour of an angular front bumper with LED lights. A lower rear bumper, bulging side skirts, a tailgate spoiler and 18-inch alloys round off the looks, and turned plenty of heads on our test drive.

The best work comes inside, though, where superb suede sports seats hold you firmly in place, without squeezing too hard, and the Alcantara-trimmed steering wheel feels sporty and expensive in your hands.

All these tweaks carry a £1,700 premium over the 187bhp 1.6 DiG-T Tekna model the Nismo is based on, and represent decent value on their own. But then there’s the increased power and tuned suspension to consider.

The turbo engine has only been tuned lightly, and delivers just 10bhp more, but even so it entertains with its slightly manic character once the turbocharger comes on boost.

Acceleration is strong and throttle response sharp – especially in Sport mode – but bursts of throttle are accompanied by a drone that never sounds that sporty.

To help tame the Juke’s natural tendency to roll through corners, Nissan’s stiffened the suspension by 10 per cent, but hasn’t lowered it in order to maintain the raised view of the road ahead. The result is that the Juke can’t hide its high centre of gravity in bends and rolls far more than a normal hot hatch. Even so, the ride is surprisingly supple – the newcomer glides over bumps and cracks where a Fiesta ST would shake like a leaf.

Still, there’s plenty of fun to be had, with strong brakes, quicker steering and just enough grip to carve neat lines through corners. Press on a bit, and it’s happy to spin up its inside front tyres and it scrabbles around for grip.

View it as a hot hatch, and the Juke Nismo predictably falls short of more dynamic rivals like the Renaultsport Clio. But approach it from another angle – as something that’s genuinely different and good fun to drive – and there’s plenty to like.