Plastic pick-up: beach cleaning with a Nissan Navara AT32 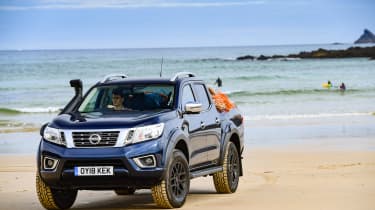 “I think one of the most interesting pieces I ever picked up was a Hula Hoops crisp packet from 1987,” says Emily Stevenson, a 21-year-old marine biology graduate who is now safeguarding Cornwall’s beaches from plastic. “It just goes to show that this stuff stays forever, it doesn’t decompose.”

More than eight million tonnes of plastic end up in the world’s oceans each year, causing untold damage to marine and beach ecosystems. And up to 80 per cent of all ocean litter is made of plastic, according to the United Nations.

While the UK’s recycling efforts are better than in many other countries, oceans have little regard for borders. Plastic is washed on to Britain’s beaches from as far afield as China. To help keep the country’s beaches clean, local community groups like Beach Guardian, organised by Emily and her father, Rob, are vital.

Interestingly, car manufacturers are lending a hand, with Nissan agreeing to provide a fleet of vehicles across Europe to those who need help clearing beaches. In the UK, it’s put up a hardcore version of its Navara pick-up, the Arctic Trucks-modified AT32, for the job. So Auto Express grabbed the keys and headed down to Cornwall to pick up some plastic.

“We moved to Cornwall 10 years ago,” explains Rob. “It wasn’t long until we started to notice all the plastic on the beach, so Emily and I would then start picking it up to clean the beach.” What started as a father and daughter activity soon grew into a community movement.

Beach Guardian now has official approval as a community interest group and organises regular beach cleans across Newquay, also working with local schools to spread the word on plastic use and waste. There’s even a Beach Guardian laboratory equipped with microscopes and other tools to help students learn about the effects of ocean plastic. Emily’s efforts in raising awareness of plastic use even led to broadcaster and naturalist Sir David Attenborough writing a personal letter of congratulations to her. 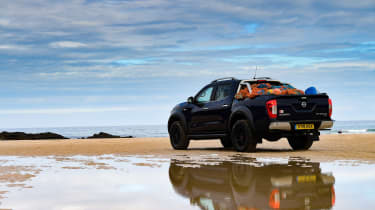 Almost all of the plastic collected by Beach Guardian is used either as teaching props for students, or given a new purpose. Plastic bottles, for example, double as plant pots when cut in half.

An average beach clean-up involving 50 volunteers will often result in 10 binbags full of plastic waste. “The most we’ve ever found was 10,000 items of plastic in a single day,” says Emily. The winter months are the worst, as Atlantic storms often deposit debris and plastic on UK shores. “One day I picked up 500 items of plastic on the beach,” says Rob. “The next day, Emily went to the same beach after me, and she came back with a further 250 items.”

While most of the work is done by hand, the need for help from vehicles occasionally arises. “It all started with a beach near Porthcothan,” explains Rob. “I was there picking up plastic, but it was too far to get a vehicle to, so I asked for help online. A local Land Rover owner came to the rescue, but even his Defender wasn’t capable of accessing the remote location.” This is when Nissan stepped in. “After some discussions, it agreed to lend the AT32. We drove it to the beach and cleared all of the plastic from it,” he adds.

The AT32 is based on the top-spec Navara Tekna with optional rear diff-lock, and adds Arctic Trucks’ extras including 32-inch Nokian off-road tyres, 20mm higher ground clearance and a Safari Snorkel raised air intake. The off-roader has been used to remove nets buried deep in the beach, dislodge tree trunks blocking cave exits and drive to remote locations normal cars or SUVs wouldn’t dream of entering. “It’s made a huge impact,” says Rob. 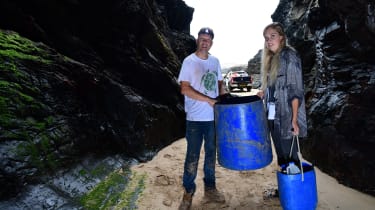 To show what he means, we drive the AT32 on to Treyarnon Beach near Padstow. The low tide allows us to take the truck all the way to the shoreline, near some caves. Rob leads us inside. “I’ve not been here for a few weeks, but there’s often plastic and other material lodged in here,” he says.

As we go further into the dark, damp cave, we spot plastic bottles, oil drums, bits of net, slippers, a wetsuit and all sorts of trash that has no place on the beach. All this rubbish has built up in the cave over a couple of weeks, and we get to work taking it back to the truck.

“It’s incredible some of the stuff we find: 21 years ago, a container that had Lego pieces in it overturned, and we’re still finding the plastic bricks on the beach,” Emily tells us. Other treasures have included a Schweppes bottle cap from the 1800s.

We drive the AT32 back closer to the main beach and take part in the community beach clean up. Here we focus on something called nurdles: tiny, fragmented pieces of plastic that hide in the sand. “This is the stuff that fish and other sea creatures can digest,” says Emily. Every handful of sand reveals some plastic mixed there – quite concerning, given that we are working only within a single square metre.

“It’s only once you start looking into every nook and cranny of the beach that you’ll find plastic, or traces of it, everywhere,” says Rob. “If we want things to change, we need to stop using so much plastic.”

Looking for a pick-up to help clean your beach? Then take a look at our best pick-up truck page here. 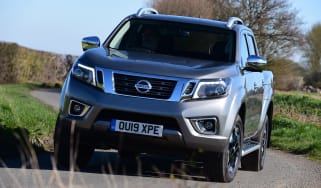 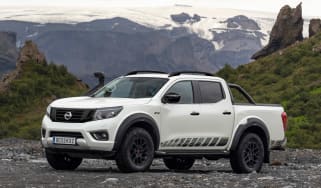 Nissan Navara Off-Roader AT-32 revealed as a tougher, more off-road-focussed version of the Navara